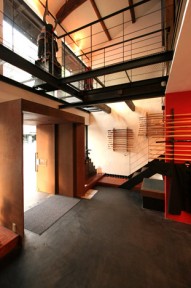 And so it has come to be that the beauty of a Japanese room depends on a variation of shadows, heavy shadows against light shadows – it has nothing else
Junichiro Tanizaki, In Praise of Shadows

We lingered wordless while a tall
Shade enclouded the shadow’s cast.
Allen Tate, Shadow and Shade

The present is the ever moving shadow that divides yesterday from tomorrow.
Frank Lloyd Wright (architect), Night is but a Shadow Cast by the Sun

The shadow of the Venetian blind on the painted wall,
Shadows of the snake-plant and cacti, the plaster animals,
Focus the tragic melancholy of the bright stare
Into nowhere, a hole like the black holes in space.
John Ashbery, Forties Flick

Recently I saw an interesting profile of an American architect. He lives and works in Kyoto. His name is Geoffrey P Moussas. One of his interests is renovating machiya. Machiya are traditional Japanese town houses. The results are very beautiful. Check out the Design 1st site.

He became interested in Japanese architecture after reading In Praise of Shadows by Junichiro Tanizaki. He said that in his architecture studies he had been learning how to use light. But after reading the book he realized that there was another approach. In Japan people used shadow.

I thought it was very interesting. Looking at the same thing from a completely different direction. I like taking photos. Photography is also using light. Painting with light even. For example a lighting technique used for portraits is called Rembrandt lighting. But I had never thought of photography as also painting with shadow.

In a nice coincidence one of the projects on Geoffrey Moussas’s home page is Tozando. The martial arts supplier. It looks fantastic.

And for the last few hundred years one of the main schools of the Japanese sword is called Shinkage Ryu. The new shadow school.

John Ashbery, Forties Flick and other poems with Spanish translations