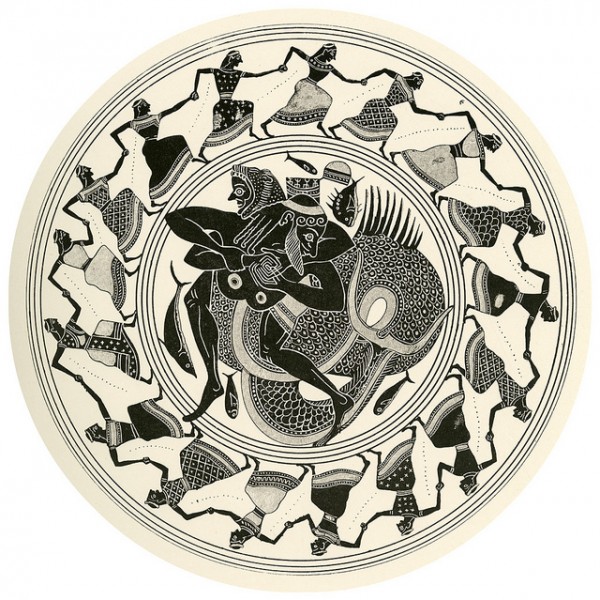 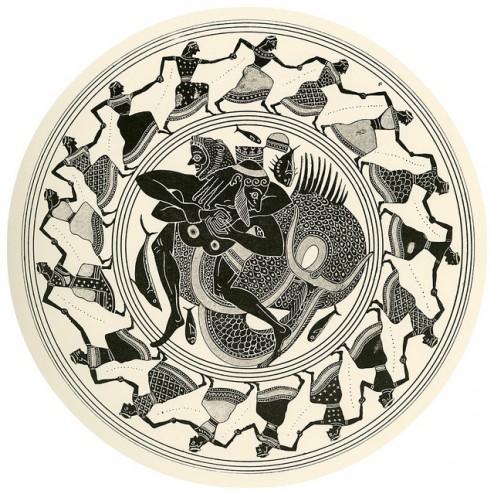 This is how he grows: by being defeated, decisively, by constantly greater beings.
Rainer Maria Rilke, The Beholder

which one of them is raw, or baked in the sun or not,
so you might get to know one who is inactive and open,
pulling him down after throwing him over from the Chersonese
after hooking his leg with yours behind his knee
then after you turn his shoulder over,
you fall heavily upon him
Aristophanes, Knights

If I can catch him once upon the hip,
I will feed fat the ancient grudge I bear him.
William Shakespeare, The Merchant of Venice, act 1, scene 3

Like all who contended in the games, the Wrestlers were accustomed to rub their bodies with oil, partly to check the excessive perspiration occasioned by the heat and the violence of the exercises, and partly from an opinion that the oil gave the limbs a greater degree of pliancy and agility. As the smoothness occasioned by the oil would have prevented the combatants from grasping each other with firmness, it was customary for them, after being anointed, to roll themselves in the dust of the Stadium, or to be sprinkled with a fine sand kept for that purpose at Olympia. If in falling, one of the Wrestlers dragged his adversary along with him, the combat was continued on the ground, till one of the parties had forced the other to yield the victory.
Jacob Robinson and Sidney Gilpin, Wrestling and Wrestlers

we need to know what to do
when we’re getting cranked
Jeff Kass, All wrestlers practice failing

Too true it is, deserted of my strength,
These withered arms and limbs have failed at length.
Oh! had I now that force I felt of yore,
Known through Buprasium and the Pylian shore!
Victorious then in every solemn game,
Ordained to Amarynces’s mighty name;
The brave Epeians gave my glory way,
Aetolians, Pylians, all resigned the day.
I quelled Clytomedes in fights of hand,
And backward hurled Ancaeus on the sand
Homer, The Illiad

Here we are, my mercenary Greek,
back at the same crossroads
where you bested my father.
The ground when you pinned him down
is what defeated you in
hold after hold or until
you found the way to filet his strength,
the way a fisherman’s instinct
cleans flesh from the bone of earth.
Terreson, Antaeus’s Son to His Father’s Killer

we hold until I am exhausted
he is a trickling thing of sand
a scintilla that drains back into the beach
a shock of trees released by strong winds
he is a fish, a slither
an eel that flits away
then has me pinned
Steve Parker, Lights fall from the Old Man of the Sea

In fact the modern Olympic style of wrestling most closely resembling that of Ancient Greece is Judo, a sport invented by a Japanese professor of English in 1882
Christopher Miller, Submission Fighting and the Rules of Ancient Greek Wrestling

If an Olympic champion of 20 years ago were to attend a wrestling tournament now, he probably could not tell what is going on.
Nenad Lalovic, president of the international wrestling federation

All right, pop quiz. What’s the difference between freestyle wrestling and greco-roman?

In February 2013 the International Olympic Committee voted to remove wrestling from the list of core Olympic sports. Japan is one of the strongest wrestling nations at the Olympics and in Japan this was seen as part of a deliberate and continuing attack on Japan and Japanese sport. Baseball and softball were removed from the Olympics for 2012. Both sports in which Japan usually wins a medal. And now wrestling.

Removing baseball and softball is difficult to justify. They are popular sports played and watched by many, many people of all ages all over the world. But wrestling is different. The number of active participants is small. They are mostly school students. Spectators are mostly wrestlers and their parents. The rules are unfathomable. (What is that guy doing on his hands and knees?). So for the 2020 Olympics wrestling will have to compete with baseball/softball, karate, roller sports, sport climbing, squash, wakeboarding and wushu. What will be the deciding factor? The number of people who play the sport? The number of people who watch the sport? Or the number of sponsors who are prepared to pay to be associated with the sport?

Judo was introduced in 1964 when the Olympics were held in Tokyo. Taekwondo was introduced as a demonstration sport in 1988 when the Olympics were held in Seoul. So if Tokyo is awarded the 2020 Olympics there might be a chance for karate. There are different styles of karate which is why it has not been attractive as an Olympic sport. If karate and taekwondo could come to some agreement over common rules the sports could be combined for international competitions. I am quite sure that will happen in the next few decades.

Judo itself is probably in danger. Modern judo is mostly not very interesting to watch. And the rules are difficult to understand. At the February 2013 Judo Grand Prix in Düsseldorf many matches were decided by penalties. That was not a good sign. So the judo world too should be thinking creatively. Judo is wrestling with jackets. Jackets are useful. They allow easy gripping, dynamic throws and good control. You can even use jackets in ground techniques. When Olympic judo gold medallist Hidehiko Yoshida started mixed martial arts fighting he wore a judogi. He wanted to keep the option of using his own jacket. And he choked out Royce Gracie with sode guruma jime.

So if wrestlers could be persuaded to wear jackets a universal sport of jacket wrestling could be introduced for competitions. The best of wrestling, judo and sambo. Sambo is a Russian martial art. It already has some similarities with judo and some people have excelled in both. Katsuhiko Kashiwazaki was a world judo champion and also a world sambo champion. By the way he was a superb judo newaza technician. You can check out how he expertly used a jacket to wrap up his opponent’s wrist in the video below.

So we would be down to one sport for kicking and striking and one sport for wrestling with jackets. Then we could get to work on horse sports, rowing, paddling and sailing sports, cycling, diving, basketball, tennis, golf… The Olympics could look more like the Universiade. It has only 13 main sports.

The evaluation commission of the International Olympic Committee came to Tokyo at the beginning of March 2013. Stations in Tokyo were covered in Tokyo 2020 posters and tv commercials promoting Tokyo 2020 were showing in the trains. The advertising campaign strongly featured some of Japan’s Olympic medallists from London 2012. Mostly it looked like wrestling. You know, the sport that won’t be at the 2020 Olympics.

Oh yes. The answer to the pop quiz. “Shoot the hostage!” (Keanu Reeves, Speed). Wrestling has only got itself to blame. Judo you’re next.

some of the cool poems quoted above are collected on these great pages of wrestling poetry, including:
Terreson, Antaeus’s Son to His Father’s Killer
Steve Parker, Lights fall from the Old Man of the Sea
Jeff Kass, All wrestlers practice failing
http://clatterymachinery.wordpress.c…meet-48-poems/ http://clatterymachinery.wordpress.c…y-in-november/