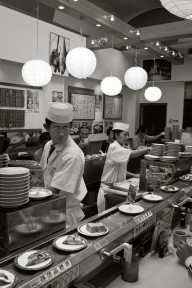 I mount the steps and ring the bell, turning
Wearily, as one would turn to nod good-bye to Rochefoucauld,
If the street were time and he at the end of the street
T S Eliot, The Boston Evening Transcript

It was my thirtieth
Year to heaven stood there then in the summer noon
Though the town below lay leaved with October blood.
O may my heart’s truth
Still be sung
On this high hill in a year’s turning.
Dylan Thomas, Poem in October

To those waiting with bated breath for that favourite media catchphrase, the U turn, I have only one thing to say. You turn if you want to. The lady’s not for turning.
Margaret Thatcher, speech to the Conservative Party Conference, 10 October 1980

One minute you’re on top, the next you’re sushi.
Morgana, Little Mermaid II: Return to the Sea

We use the word kaiten in the martial arts. It means turning or rotation. One of the basic techniques in aikido is kaiten nage – turning throw.

Kaiten zushi is the sushi that goes around on a conveyor belt.

The apprenticeship of a sushi chef takes many years. The fish must be of very good quality so that it can be eaten raw. So sushi in a traditional restaurant can be very, very expensive.

There was a national holiday this weekend and like a lot of families in Japan we went out for sushi. We went to a kaiten zushi restaurant. The first kaiten zushi restaurant was opened in 1958. Of course chain restaurants try to keep costs very low but we were still surprised. There were 50 to 100 customers in the restaurant but there were hardly any people working there. We didn’t see any chefs. We didn’t even see any serving staff. The only staff we saw were two high school girls working there part-time.

You do everything yourself. So we took plates of sushi off the conveyor belt. And ordered some things on a touch panel. They arrived in a few minutes. We cleared the plates ourselves into a slot under the conveyor belt. Every time five plates were cleared some lights started flashing and if you pressed a button at the right time you could win a little toy. We helped ourselves to drinks from a large glass-fronted refrigerator. If you wanted draught beer you put money into a machine and the beer poured itself automatically. Complete with a perfect head. So it was not quite fast food but it was close. It tasted fine. And it was very, very cheap.

Going back to traditional sushi for a moment a documentary movie called Jiro Dreams of Sushi was released in 2012. It was about a man who devoted his life to achieving perfection in sushi. His name is Jiro Ono. He is a living national treasure. His restaurant Sukiyabashi Jiro is one of only a handful of restaurants in Tokyo with three Michelin stars. He is in his eighties but he still goes to work every day. Like the Sheffield master craftsmen knifemakers I wrote about, Trevor Ablett and Reg Cooper. This is what Jiro Ono said about sushi and his life.

I do the same thing over and over, improving bit by bit. There is always a yearning to achieve more. I’ll continue to climb, trying to reach the top, but no one knows where the top is.

He could be talking about aikido.