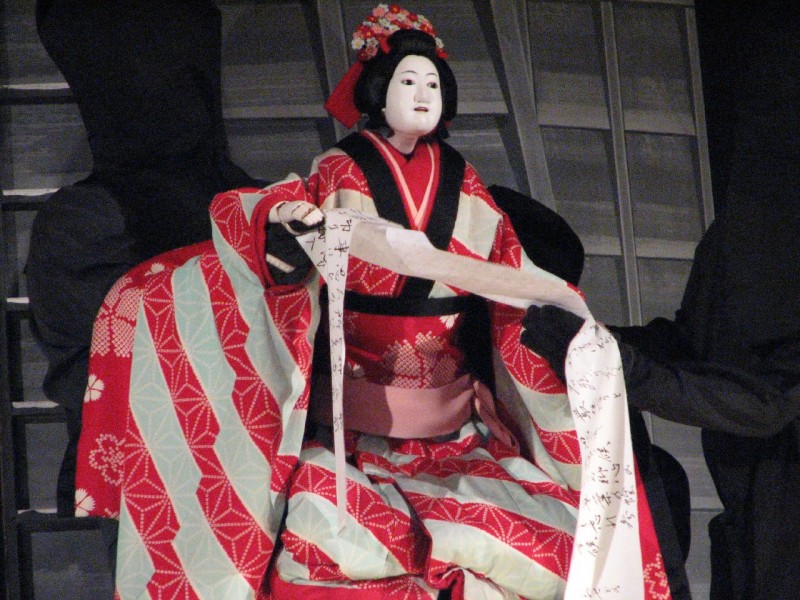 each man must realize
that it can all disappear very
quickly:
the cat, the woman, the job,
the front tire
Charles Bukowski, Pull A String, A Puppet Moves

a clock stopped –
not the mantel’s –
Geneva’s farthest skill
can’t put the puppet bowing
that just now dangled still
Emily Dickinson, A Clock Stopped
whatever men pursue
of pleasure, folly, war, or love,
This mimic-race brings all to view,
Alike they dress, they talk, they move
Jonathan Swift, The Puppet Show
I wish I could look inside your head
And read your thoughts
They’re so instead, they’re so instead
Here we go on again
The same old game…

I’m just like your puppet on a string
For in this game
You always win
Jasmin Tabatabai, Puppet from the movie Bandits

And when I am a puppet
And when I have no voice
I’m in your hands now
I am your puppet
Lisa Germano, Puppet

All you got to do
Is wiggle your little hand
I’m your puppet
James and Bobby Purify, I’m Your Puppet

In crow I talked about Detective Conan. It’s a manga and animé series about a boy detective. It’s very popular with children and people in their twenties. I only mentioned it in passing in my column Martial Arts in Manga and Animé because it is not directly about learning budo. But in fact several of the characters are accomplished martial artists. This comes into the story occasionally when someone has to use a martial arts technique for self-defence against a murderer. The famous private detective Kogoro Mori is a skilled judoka. His daughter Ran is a karate champion. Heizo Hattori is an excellent kendoka. And his girlfriend Kazuha Toyama has 2 dan in aikido.

In Detective Conan a possible scenario of what happened at a murder scene is sometimes shown while Conan works out what happened. The murderer is always shown as the same vague black shape.

It reminded me of the puppet manipulators in bunraku. Bunraku is the traditional Japanese puppet theatre. It has close links with kabuki. In fact kabuki has used many of the stories originally written for bunraku.

If the puppeteers are very skilled you don’t even notice them as you watch the puppets move. And a tiny movement of the puppet can catch the essence of a character or suggest a deep emotion. But people were not content with just watching this level of mastery. They wanted to give recognition to the skill of the master puppeteers and so in some traditions they do not wear hoods.

This has always seemed artificial and unnecessary to me. If someone can do something perfectly why would you want to detract deliberately from the perfection by leaving the head bare. It destroys the suspension of disbelief and brings the performance down to a mere expert skill. I don’t want to see how beautifully the puppet master can make a puppet gesture. A Japanese actor once said at the moon. I want to see the moon.

Today in aikido and in other martial arts a lot of heads are uncovered. A lot of faces are showing. A lot of techniques are proudly displayed. If the heads and faces were covered perhaps we would be able to see the clear heart of budo instead of artificial and soulless technique.

music
Jasmin Tabatabai, Puppets
from the very cool soundtrack from the movie Bandits

this post is simultaneously published on aikiweb the internet aikido site

my columns on aikiweb:
Resistance
Martial Arts in Manga and Animé
Indigo Blue
Improvised Weapons No.1: The Umbrella
Brothers
Unbalance – Feet of Clay
Half a Tatami
Zen in the Art of Aikido