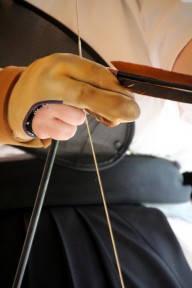 Sometimes a word will start it, like
Hands and feet, sun and gloves. The way
Is fraught with danger, you say, and I
Notice the word “fraught”….
John Ashbery, Variant

Lawn as white as driven snow,
Cyprus black as e’er was crow,
Gloves as sweet as damask roses,
Masks for faces and for noses.
William Shakespeare, The Winter’s Tale

I saw her hand, she has a leathern hand,
A freestone-colored hand. I verily did think
That her old gloves were on, but ’twas her hands.
William Shakespeare, As You Like It

Well, they sprung me out of Quentin,
I’m back on the mob’s payroll
They can buy my body
Sure they can’t buy my soul.
I’m working out of Stockton
I”m weighing in at two -o -one
But there’s a man in the front row
Sent down by the mob with a gun.
For ‘Kid Gloves’, ‘Kid Gloves’,
I’m back out on the street.
‘Kid Gloves’, the master to the beat
‘Kid Gloves’, I’ll do anything but dive.
Rory Gallagher, Kid Gloves

In the martial arts they use gauntlets in kendo and single gloves in kyudo. In some styles of karate they use gloves in sparring.

The other day at a train station I saw an immaculately dressed man wearing black cotton gloves. He was reading a newspaper and he didn’t want to get ink on his hands.

The Smiths, Hand in Glove
http://www.youtube.com/watch?v=Nh2bonnjv70