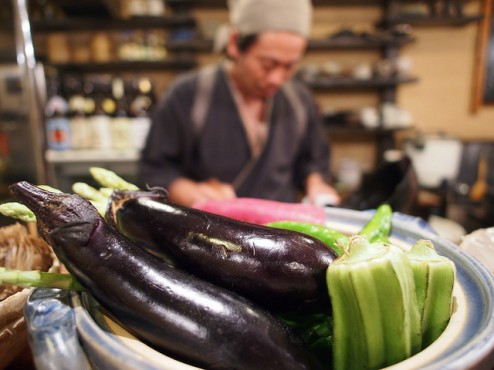 as shiny as if freshly laid
You are a melancholy fruit.
Solanum Melongena.
Every animal is sad
after eggplant.
Erica Jong, The Eggplant Epithalamion

It is a sort of dream, which coincides
With the pacific relaxations called
Preferred Reality. Men who forget
Lovingly chopped-up cloves of ail, who scorn
The job of slicing two good peppers thinly,
Then two large onions and six aubergines –
Those long, impassioned and imperial purples –
Which, with six courgettes, you sift with salt
Douglas Dunn, Ratatouille

Eggplant, the bruise-fruit, heals
in a darkroom as photographs
of contusions develop.

Gathered in a farmer’s truck,
eggplants appear ready to travel
into outer space, there to visit
purple planets in our galaxy.

The mayor has disappeared.
He was last seen getting into
a taxicab near the produce-market.
He was accompanied by an eggplant,
which he carried in a burgundy valise.

Shiny, soft, and smooth,
eggplants suggest patent-leather
shoes worn by a species whose feet
differ from ours in certain respects.

Although I dislike eating
its slippery flesh, I pay
aubergine certain respects.

There is eggplant. There
it is – a pliable stone
sitting in purple patience
waiting for us to go away.
Hans Ostrom, Aubergine

Back at Nijo, his Murasaki, now on the eve of womanhood, was very
pretty indeed. So red could after all be a pleasing color, he thought. She
was delightful, at artless play in a soft cloak of white lined with red.
Because of her grandmother’s conservative preferences, her teeth had not
yet been blackened or her eyebrows plucked.
Murasaki Shikibu, The Tale of Genji

no money
no things
no teeth
just me
Santoka Taneda

I’m writing this from Belgium. I’ll be based in Europe for a while doing some work for the EU. Things have been hectic and I’ve been too busy for the last few weeks to think about writing something interesting here. Sorry for that. Hopefully I’ll be able to write regularly from now. Perhaps I’ll write about aikido more from a European perspective in the future but for now there are lots of things about Japanese culture that I still want to write about. But it does mean that I’ll be travelling a little in Europe and teaching some aikido seminars. I hope I can meet some of you.

I got some black toothpaste in Japan. Really. Black toothpaste. Deep, dark black. It’s made from aubergines. They are called eggplants in the USA. The French word aubergine is such a beautiful name for a vegetable. Or a colour. The aubergine is in the nightshade family. Night and shade – darker than dark. The toothpaste is supposed to be very natural and healthy and good for your gums and teeth.

In Japan women used to blacken their teeth when they came of age. Blackening the teeth is called ohaguro. It is mentioned in the above quote from The Tale of Genji from the eleventh century. The custom of ohaguro continued until the late nineteenth century.

Teeth are very important in the martial arts. You naturally clench your teeth at the instant of a throw in aikido or judo. Whether you are throwing or being thrown. Or you clench your teeth at the moment of a strike or a block in karate or the sword. Some dentists recommend wearing a mouthguard or gumshield during any martial arts training. I wrote about teeth a while ago in http://www.aikiweb.com/blogs/moon-in…51/teeth-4155/ after I walked past a dentist next door to a chocolate shop in Tokyo. I’m not sure if that was symbiotic irony or ironic symbiosis.