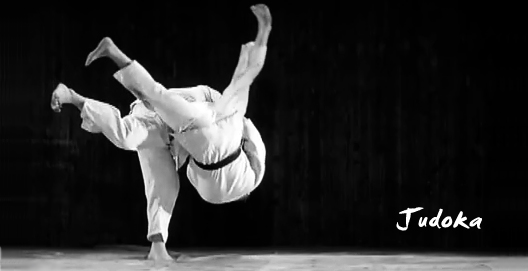 I was determined to go to Japan to outstrip them all, to learn judo. It wasn’t to go to the Olympics, it was to become really, really good at judo.
Doug Rogers

How very Canadian – I had a one-way ticket to the Olympics.
Doug Rogers

In the tunnel
the black taxi roof
a stream of neon
Colin Oliver, haiku

Youth is not a time of life
it is a state of mind
it is not a matter of rosy cheeks, red lips and supple knees
it is a matter of the will, a quality of the imagination, a vigor of the emotions
Samuel Ullmann, Youth

There was a link on a judo site to an old documentary called Judoka. It’s about a Canadian called Doug Rogers and his serious judo training in Japan. He was there from 1960 to 1965. He was obviously an exceptionally talented and determined judoka and he became one of the very best in the world. At the Tokyo Olympics in 1964 he won the heavyweight silver medal.

It’s a very interesting documentary. It shows the training and life of a young martial artist in Japan. It was a simpler, more innocent time.

There is a nice scene of Doug Rogers doing randori free training in the Nippon Budokan. The Nippon Budokan is a huge martial arts hall in central Tokyo. It was constructed for the 1964 Olympics. Over the years it has been used for rock concerts and many artists have recorded Live at Budokan albums. The All-Japan Aikido demonstration is held there every year in May.

On the wikipedia page about Doug Rogers there is a link to a thesis written about him by his daughter. It adds another dimension to the documentary. She interviews him about his life in Japan and together they go on a trip to Japan to try to make sense of the past.

some poems by Colin Oliver
http://www.poetry-chaikhana.com/Poets/O/OliverColin/