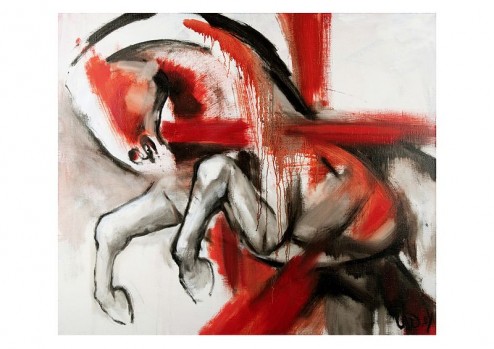 I am a feather on the bright sky
I am the blue horse that runs in the plain
I am the fish that rolls, shining, in the water
I am the shadow that follows a child
I am the evening light, the lustre of meadows
I am an eagle playing with the wind
N Scott Momaday, The Delight Song of Tsoai-talee

somewhere up there he’s waiting for me
and he knows that I’m coming’ for him
and I just can’t rest till I find
that raven black stallion that wears no man’s brand
with a wild restless spirit like mine
Chris Ledoux, Caballo Diablo

Because the pleasure-bird whistles after the hot wires,
Shall the blind horse sing sweeter?
Convenient bird and beast lie lodged to suffer
The supper and knives of a mood.
Dylan Thomas, Because The Pleasure-bird Whistles

Sometimes I have no more wit than a Christian or an ordinary man has; but I am a great eater of beef, and I believe that does harm to my wit.
William Shakespeare, Twelfth Night, act 1, scene 3

My first aikido teacher Kinjo Asoh sensei liked art. His father was an artist. Asoh sensei had some pictures of horses. You could feel their power.

There is a kind of concise Japanese proverb called yojijukugo 四字熟語 よじじゅくご. Yojijukugo are very popular and there are many books about them. They are four-character phrases. Sometimes the meaning is clear from the kanji themselves. But there are also lots of idiomatic yojijukugo with special meanings. In English we have a few four word maxims too. Like more haste less speed.

Gyuuinbashoku is a yojijukugo. 牛飲馬食 ぎゅういんばしょく. Cow drink horse eat. It means heavy drinking and eating. Drink like a cow and eat like a horse.

In Europe now there is a food scandal. Horsemeat was sold as beef and used in the manufacture of burgers and lasagna. It seems like a mislabelling for profit scandal more than a serious public health problem. But perhaps the fact that it was horsemeat was shocking.

Horsemeat is eaten a little in Japan. It can be eaten raw as sashimi called basashi or cooked. In the United Kingdom where I’m from horsemeat is not eaten at all. There is no word for it. English words for meat came from Norman French. Beef from boeuf. Pork from porc. Mutton from mouton. Anglo-saxon words were used for the animals themselves. Cow, pig, sheep. Horse.

The nineteenth century novel Black Beauty by Anna Sewell is one of the best-selling books of all time. It was a sympathetic story about the life of a horse. A similar story War Horse was filmed by Steven Spielberg in the twenty-first century.

For centuries horses have been used in war. Alexander had a famous horse called Bucephalus. In Japan some samurai fought on horseback. The katana used by horsemen was called a tachi. It had a slightly different rake and it was not worn blade up in the waistband. It was hung blade down on straps. Still today you can see demonstrations of horseback archery – yabusame – at festivals.