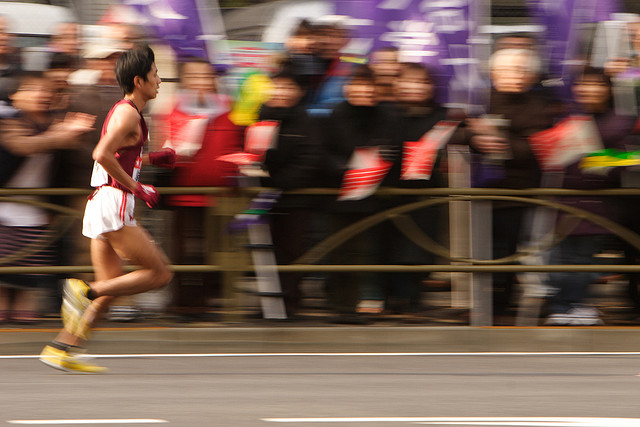 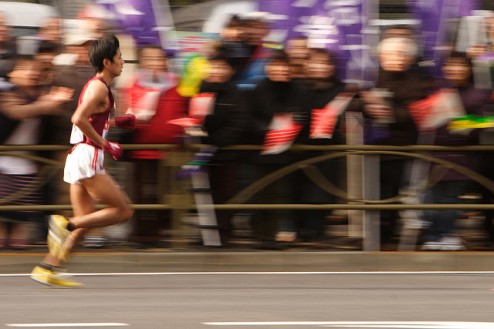 Something in me wanted to find out how far I could run without stopping.
Jacki Hanson, U.S. marathon runner

My sister and I, you will recollect, were twins, and you know how subtle are the links which bind two souls which are so closely allied.
Sir Arthur Conan Doyle, The Adventure of the Speckled Band

An apple cleft in two is not more twin
Than these two creatures.
William Shakespeare, Twelfth Night, act 5, scene 1

This beggar might be perhaps
An angel, Luther said.
Robert Browning, The Twins

Or Basho was just envious
He may be a poet of his age
But his poems never bore
Him a son
Or a mirror of his own face
Ric S Bastasa, Perhaps to Basho the twins are boring

Firearms may be kept on your person for use in emergencies. Do not fire them for pleasure or shoot at wild animals as the sound riles the horses.
Wells Fargo stagecoach rules

One of the new year events in Japan is the Hakone Ekiden. An ekiden is a long-distance relay road race. On 2 January the runners run to Hakone near Mount Fuji. On 3 January runners run from Hakone to Tokyo. The race is broadcast live on television over the two days. It is one of the most popular sports events in Japan.

The idea of the word ekiden is like a stagecoach. The first ekiden was held in Japan in 1917 over 500 kilometres from Kyoto to Tokyo. The Yomiuri Shimbun newspaper sponsored the first ekiden race. Toki Zenmaro was a poet who worked at the Yomiuri Shimbun at the time and he used the word ekiden for the first time to describe a road race. Now the course is often a full marathon or a half marathon.

In the Yomiuri newspaper recently there was an article about twins Haruka and Moe Kyuma. They are both great runners. They were members of the Tsukuba University women’s team that was third at the 2012 All-Japan Women’s College Ekiden Championship in October 2012.

And in the 2012 men’s Hakone Ekiden twins Yuta and Keita Shitara both ran for Toyo University.

In the past twin brothers Shigeru and Takeshi So were famous Japanese marathon runners. They both competed at the Los Angeles Olympics in 1984.

In Japanese you don’t say my brother or my sister. You always put it in context. My younger brother or my younger sister. If you are watching a movie in English and one of the characters talks about a brother or sister without specifying older or younger the subtitle translator just guesses.

The den in ekiden means transmission. It is the same letter used in densetsu, legend. And denki, biography. And hiden. Secret transmission.

http://www.yomiuri.co.jp/dy/columns/…0103003863.htm
Musings, from the Daily Yomiuri, including a poem by Zenmaro Toki

http://www.yomiuri.co.jp/dy/sports/T121114004336.htm
Twins get Tsukuba back on winning track, from the Daily Yomiuri