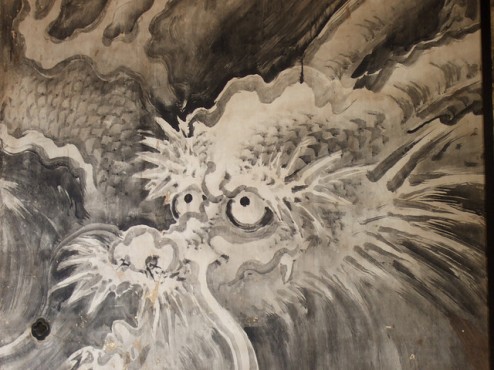 Hard by the lilied Nile I saw
A duskish river-dragon stretched along,
The brown habergeon of his limbs enamelled
With sanguine alamandines and rainy pear:
Thomas Lovell Beddoes, A Crocodile

In this altar-piece the knight,
Who grips his long spear so to push
That dragon through the fading light,
Loved the lady; and it’s plain
The half-dead dragon was her thought,
That every morning rose again
And dug its claws and shrieked and fought.
W B Yeats, Michael Robartes and the Dancer

But each day brings its petty dust
Our soon-chok’d souls to fill,
And we forget because we must,
And not because we will.
Matthew Arnold, Absence

I had to spend many years losing my spirit, to unlearn thinking again, to forget the oneness.
Herman Hesse, Siddhartha

Japan in December is the time for parties for the end of the year. In Japanese they are called bonenkai. Parties to forget the year. Companies have them. Neighbourhoods have them. And of course dojos have them. Many people have to go to several.

2012 was the year of the dragon. Looking back on the year I’ll just take a couple of memories.

In Japan people were excited when Tokyo Skytree opened in May 2012. It was 634 metres feet high. Musashi in Japanese slang. I wrote about it here. It’s one of the most popular tourist spots in Tokyo now.

The 2012 summer Olympics were held in London. The opening ceremony was dramatic and there were some great moments. The one I won’t forget was David Rudisha winning the 800 metres.

There were some farewells in 2012. Every year we lose great martial artists and their irreplaceable knowledge. Hiroshi Kato Sensei died in 2012. He was a Japanese aikido teacher. After he retired he taught in the USA. I trained with him many years ago. I have a good memory of him showing me how to do a dynamic koshi nage from nikyo – a hip throw from a wristlock.

Bad things happened in 2012 too. But I have forgotten them.

We use forgetting in the highest level of martial arts. All arts in fact.

So I’ll finish with another cool martial arts quote. This time from a movie.

Learn the form.
But seek the formless.
Hear the soundless.
Learn it all.
Then forget it all.
Learn the Way.
Then find your own way.
Jet Li, The Forbidden Kingdom

So I hope you had a good year. And that you have already forgotten the bad things.

Have a great 2013. Full of fresh and wonderful moments. The year of the snake.

http://www.web-books.com/Classics/Po…hael/index.htm
W B Yeats, Michael Robartes and the Dancer
http://www.csun.edu/~hceng029/yeats/poemsalpha.html
poems by W B Yeats online

http://www.youtube.com/watch?v=aD6WMz7losU
Elvis Presley, I Forgot to Remember to Forget