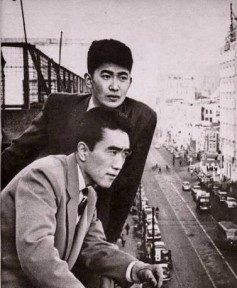 We are not come to wage a strife
With swords upon this hill,
It is not wise to waste the life
Against a stubborn will.
Yet would we die as some have done.
Beating a way for the rising sun.
Arna Bontemps, The Day-Breakers

The sun may set and rise:
But we contrariwise
Sleep after our short light
One everlasting night.
Sir Walter Raleigh, From Catullus V

It is morning, Senlin says, and in the morning
When the light drips through the shutters like the dew,
I arise, I face the sunrise,
And do the things my fathers learned to do.
Stars in the purple dusk above the rooftops
Pale in a saffron mist and seem to die,
And I myself on a swiftly tilting planet
Stand before a glass and tie my tie.
Conrad Aiken, Senlin: a Biography

It’s election time in Japan. There will be a few weeks of incessant election noise. People making speeches outside railway stations. Trucks with blaring loudspeakers driving up and down the streets.

Japanese politics are mysterious. There are a few new political parties in Japan this year. One is the Sunrise Party. The leader is Shintaro Ishihara. He is an author and politician. When he was a university student he won the Akutagawa Prize for his novel Season of the Sun. The name of the new party deliberately echoes that title. Shintaro’s younger brother Yujiro starred in the movie adaptation. Yujiro Ishihara was hugely popular. He died young. Shintaro Ishihara himself is very controversial. Some people like his direct style. But when he was Governor of Tokyo he was xenophobic, racist, homophobic and sexist.

The People’s Life First Party is another new party. Its most senior politician Ichiro Ozawa has finally been cleared in a court case. The decision to prosecute him and the decision to appeal the original not guilty verdict seemed politically motivated rather than based on the evidence. So is Japan really a modern democracy?

The world of martial arts has a close relationship with the world of politics. Perhaps too close. Politicians write introductions for the programs for martial arts events. They give speeches at the events or the receptions later. Some politicians have been accomplished martial artists. A few have held high ranks in kendo. Judo Olympic and World champion Ryoko Tani was one of the most popular figures in Japanese sports. She became a politician. She is also in the People’s Life First Party.