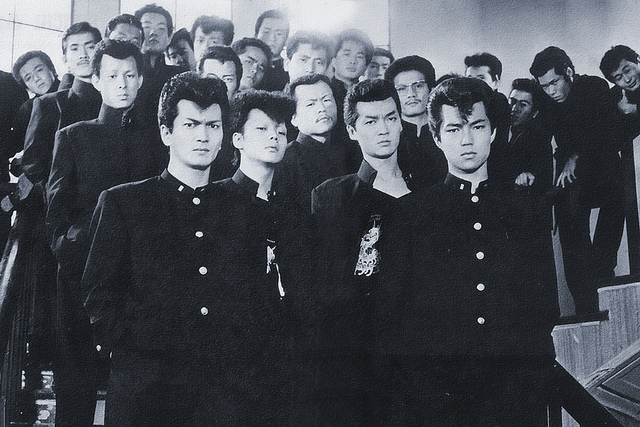 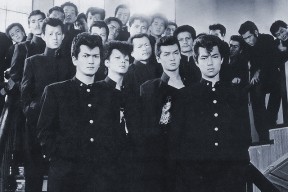 Think what was there but now’s gone.
Black suit with the black Ray Ban’s on.
Walk in shadow, move in silence
Will Smith, Men in Black

He recollected his initiation,
And one especially of the rites.
For on his shoulders they had put tattoos:
The group’s name on the left, The Knights,
And on the right the slogan Born to Lose.
Thom Gunn, Black Jackets

We’re doing mighty fine I do suppose
In our streak of lightning cars and fancy clothes
But just so we’re reminded of the ones who are held back
Up front there ought to be a man in black
Johnny Cash, Man in Black

The other day in Tokyo I saw a young man wearing a black uniform. It was unusual because it had a letter embroidered on the back in black thread. It was black on black so it was easy to miss.

The black uniform is called a gakuran. It’s a military-style uniform. Black uniforms all look the same so some students or groups add subtle individual details in the shape or the stitching. In the video below the band is wearing long jackets and baggy trousers like hakama. They look like a gang from the 1970s or 80s.

I wear a black hakama to do aikido. When I get a new one I get the name embroidered on the hip in Japanese kanji. Usually in grey or silver or dark yellow thread. But once I did get it in black. Black on black.

Will Smith, Men in Black