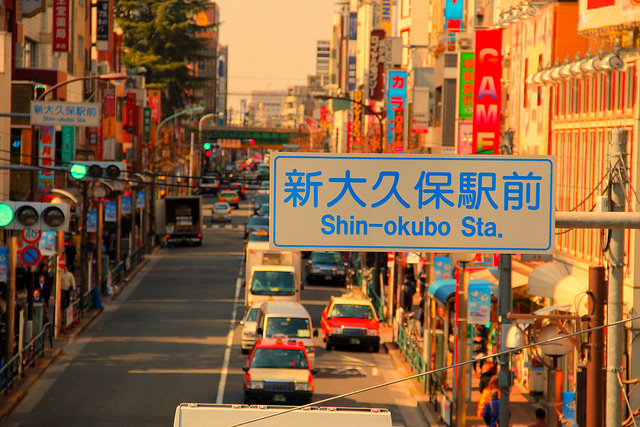 Where’s the mountain I ‘ve just come down?
Where am I?
Ko Un, Walking Down a Mountain

Even if you know the way, ask one more time.
Korean proverb

There has been a Korean boom in Japan for a few years. It started with a TV drama series called Winter Sonata in 2002. Then one or two Korean pop artists released songs in Japanese. Now there are many, many popular Korean singers and groups.

There are a lot of Korean restaurants and shops selling Korean music and related goods near Shin-Okubo station in Tokyo. It used to be a dying area. Especially during the day. At night it was perhaps a little busier because it is close to some of the Shinjuku entertainment areas. But in the last couple of years it has become a bustling shopping area. Most of the people who go there now are very, very young. They are fans of Korean pop idols and actors. I have to say that Korean movies are usually much more realistic than Japanese movies.

Shin-Okubo is quite near the Aikikai hombu dojo. And it’s the closest station to the Iwata budo supply store. I wrote about the store in Iwata. It’s where I get all my aikido uniforms: aikidogi and hakama.

When I went to Korea years ago there was no aikido. Not even one dojo. I think there are a few there now. But I did go to a hapkido dojo. Hapkido is written with the same three Chinese characters as aikido. 合気道. It’s supposed to have descended from aikijujutsu. It was very energetic and athletic. And the uke was expected to be very responsive. I didn’t much like training to music though.