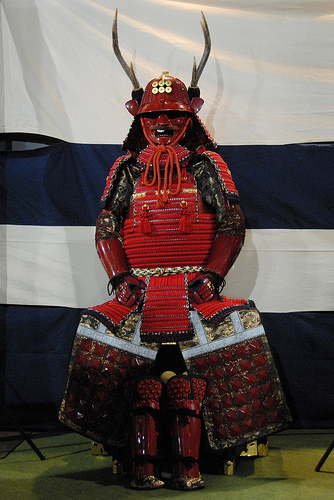 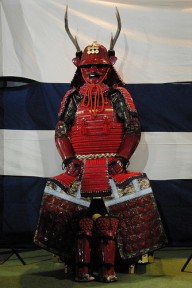 Do not plan for my return.
General Takamichi Kuribayashi, of Nagano, writing to his wife

I just got back from sword training in Nagano. Nagano is in the Japanese Alps. The winter Olympics were held there in 1998. It is an area of volcanic mountains and stark and mysterious rock formations. The countryside is beautiful. And the food is delicious.

Two small details stick in my mind. I could get an English newspaper in Nagano. But it was a day old. Outside Tokyo the newspapers are always a day late. And one organized man bought all his omiyage souvenir presents on the way there.

Sanada Yukimura is a famous samurai from Nagano in the Sengoku Warring States period. He was a master of military strategy. He was called the best warrior in Japan. He fought in many battles.

His father Sanada Masayuki fought with Yukimura in the Western forces against Tokugawa Ieyasu. But in an astonishing tactical move he aligned his first son Sanada Nobuyuki with the Eastern forces. It was reminiscent of the Judgment of Solomon. Whatever the outcome the Sanada line would survive. But the family would be forever divided.

General Takamichi Kuribayashi was an impressive warrior from Nagano in the twentieth century. He was played by Ken Watanabe in the Clint Eastwood movie Letters from Iwo Jima.

photo: The Armor of Yukimura Sanada by Kosei S.