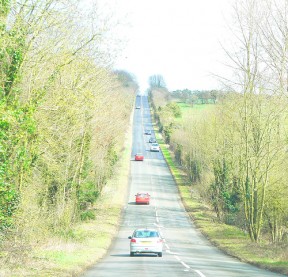 The Roman Road runs straight and bare
As the pale parting-line in hair
Across the heath. And thoughtful men
Contrast its days of Now and Then,
And delve, and measure, and compare;

Visioning on the vacant air
Helmeted legionnaires, who proudly rear
The Eagle, as they pace again
The Roman Road.

But no tall brass-helmeted legionnaire
Haunts it for me. Uprises there
A mother’s form upon my ken,
Guiding my infant steps, as when
We walked that ancient thoroughfare,
The Roman Road.

This poem completes a triptych of Roman Britain poems. Roman Wall Blues by W H Auden, The Roman Centurion’s Song by Rudyard Kipling,  and this one by Thomas Hardy. And that’s the second time I’ve used triptych in the last two weeks. The last time was sets of three associated portraits of Japanese people. This meaning is a set of three artistic works.

Language. Hardy says helmed twice, helmed legionaries and helmed legionnaires. The rest of the language is quite straightforward. Delve means dig or investigate. And ken means sight or knowledge.

There is a simple rhyming scheme aabba aabc aabbac. You can read it as a 13-line poem or as a 15-line poem the way it is typeset. Or as a 14-line sonnet.

So we have Auden’s marching song, Kipling’s story of exile, and Hardy’s direct contrasting of the brass-helmed legionnaire and his own mother’s form. It is a pleasure to read them all. Thomas Hardy is one of the greatest novelist poets.  Auden is one of the leading poets of the twentieth century. And Kipling is a master storyteller who moves easily between prose and poetry. I like all three poems. But it is Kipling’s centurion who lingers in the memory.

photo: The Fosse Way by florriebassingbourn