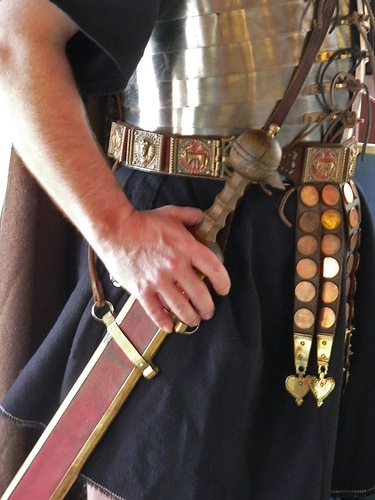 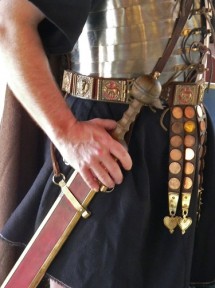 Legate, I had the news last night – my cohort ordered home
By ships to Portus Itius and thence by road to Rome.
I’ve marched the companies aboard, the arms are stowed below:
Now let another take my sword. Command me not to go!

I’ve served in Britain forty years, from Vectis to the Wall,
I have none other home than this, nor any life at all.
Last night I did not understand, but, now the hour draws near
That calls me to my native land, I feel that land is here.

Here where men say my name was made, here where my work was done;
Here where my dearest dead are laid – my wife – my wife and son;
Here where time, custom, grief and toil, age, memory, service, love,
Have rooted me in British soil. Ah, how can I remove?

For me this land, that sea, these airs, those folk and fields suffice.
What purple Southern pomp can match our changeful Northern skies,
Black with December snows unshed or pearled with August haze –
The clanging arch of steel-grey March, or June’s long-lighted days?

You’ll follow widening Rhodanus till vine and olive lean
Aslant before the sunny breeze that sweeps Nemausus clean
To Arelate’s triple gate; but let me linger on,
Here where our stiff-necked British oaks confront Euroclydon!

You’ll take the old Aurelian Road through shore-descending pines
Where, blue as any peacock’s neck, the Tyrrhene Ocean shines.
You’ll go where laurel crowns are won, but – will you e’er forget
The scent of hawthorn in the sun, or bracken in the wet?

Let me work here for Britain’s sake – at any task you will –
A marsh to drain, a road to make or native troops to drill.
Some Western camp (I know the Pict) or granite Border keep,
Mid seas of heather derelict, where our old messmates sleep.

Legate, I come to you in tears – My cohort ordered home!
I’ve served in Britain forty years. What should I do in Rome?
Here is my heart, my soul, my mind – the only life I know.
I cannot leave it all behind. Command me not to go!

Vocabulary. The version of The Roman Centurion’s Song on wikisource has hyperlinks to explanations of the Latin names. Portius Itius is a port in Picardie in France/Gallia. Vectis is the Isle of Wight in the south of Britain. The Wall is Hadrian’s Wall. The Rhodanus is the river Rhône. Nemausus is Nîmes. Arelate is Arles. The Euroclydon is a Mediterranean wind. The Aurelian Road is the Via Aurelia. The Tyrrhene Ocean is the Mediterranean Sea between Sicilia and Corsica.

Roman Wall Blues by W H Auden was last week’s poem of the week. This is another poem about Roman Britain. About the Romans leaving.

I wrote about The Bank Robber by Robert Service some time ago. Robert Service’s poems/songs were in the declamatory tradition of Rudyard Kipling. They both used strong rhythms and rhymes to reinforce the interesting narratives. In this poem Kipling also used an internal rhyme scheme of mid-line rhymes – aboard in line 3, sword in line 4 and so on.

I have written about exile before in exiles and also about the Japanese diaspora in out by kirino | rashomon by kurosawa. Another post was about a Japanese woman who has spent most of her life in Northern Ireland.

The centurion buried his family in Britain.

Here where my dearest dead are laid – my wife – my wife and son.

His home is no longer Rome. He can’t go home again. He is already home. On the Kipling Society website there is a great summary of this.

It establishes comparisons, often implicit but never far away, between the Roman and British Empires, and it also deals with the highly complex topic of an individual’s personal association with the place he regards as home. This was something that pre-occupied Kipling throughout the whole of his life, and he writes about it in many different ways, in his poetry, short stories, travel sketches and autobiography. It clearly has its source in his own early movement from India to England, back to India, and back to England again, but is to be found everywhere. To mention only the most obvious connections: homesickness, patriotism, belonging, settling abroad, the imperial dilemma (Roman here, but it might just as well be British) of occupying and settling in an alien country only to find that it has come to mean more to you than your original homeland.
from notes by Peter Keating

I also have lived much of my life far from the country of my birth. I can feel some sympathy for the centurion’s cry:

What should I do in Rome?!