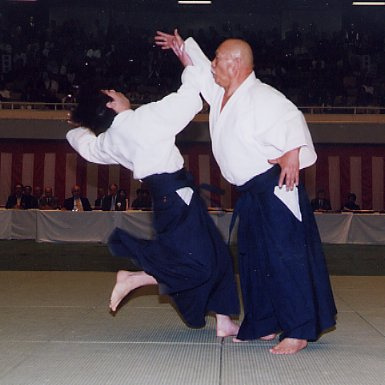 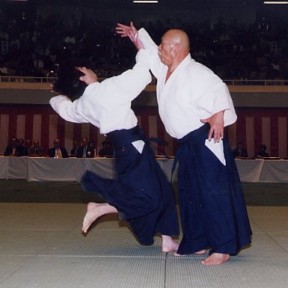 It was the All-Japan Aikido Demonstration in May. Years ago Nobuyuki Watanabe Sensei used to stand inside the entrance of the Budokan in an immaculate white suit greeting everyone with a big warm smile.

Then later on he used to do his demonstration. He did it at the same time as Masando Sasaki Sensei. As Watanabe Sensei got more and more into it and started throwing his ukes just by glaring at them Sasaki Sensei would hear the sounds of the crowd and would stop his own demonstration to watch. And applaud.

In the nineteen eighties in Japan there was a boom of interest in martial arts and especially in internal martial arts and ki. Kozo Nishino Sensei, a well-known ballet teacher and choreographer who had done aikido at the hombu dojo, became famous for his ki performances throwing numbers of his students without touching them. Also Nobuyuki Watanabe Sensei appeared on a TV program called Do-sports doing no-touch aikido. Perhaps Yoshinobu Takeda Sensei didn’t start demonstrating this style of aikido until more recently.

I have never met Nishino Sensei. Doshu Kisshomaru Ueshiba talked about Nishino Sensei’s no-touch aikido when my teacher Kinjo Asoh Sensei and I called on him once. The Doshu remembered Nishino Sensei’s orthodox aikido as having been strong and powerful – he had been about fifth dan in those days. But the Doshu merely mentioned his no-touch throws as just another approach – he was not critical.

I have known Yoshinobu Takeda Sensei for many years. He had been close to my first teacher Kinjo Asoh Sensei in the past and some of his senior students – Numata, Suzuki and Seino – came to our dojo sometimes. Their aikido was very nice – powerful and smooth and relaxed. And Hideo Numata has his own dojo now. I have trained at Takeda Sensei’s dojo in Kamakura as a guest and I have taken his ukemi. So I know that Takeda Sensei’s aikido is real and powerful.

I know Nobuyuki Watanabe Sensei much better. I don’t do aikido the way he does but I like him and respect him as a sincere and warm man. I have often been to his class at the hombu dojo. I have also been to his overseas training in München. Although I was not one of his regular students I took his ukemi sometimes in the class and even once at the all-Japan Aikido Demonstration. By the way I think that shows that Watanabe Sensei didn’t worry too much about who was the uke. I can’t imagine many teachers doing a public demonstration with someone who wasn’t one of their regular ukes. In fact I can’t imagine any.

Watanabe Sensei does two main things with the uke’s ki. One is to lead it where he wants it to go. The other thing he does is disturb the ki – destroying the energy in the attack. In the middle of a committed attack if you feel an atemi – or something – coming out of nowhere it has the immediate effect of breaking down the attack. Sometimes the no-touch triggers are very subtle but the ukes are so finely tuned to the slightest movements that it is very easy to manipulate their ki.

Why would these teachers want to demonstrate this kind of aikido? That is an interesting question. Perhaps they want to show the aikido world that there is something more? That there are other ways of thinking? Or perhaps that aikido doesn’t always have to be so serious! These are teachers with about fifty years of aikido training. If they want to play with ki the world of aikido should be big enough and open enough to accept them.

Once at his class on Saturday morning Masando Sasaki Sensei suddenly produced a ten thousand yen (roughly $100) note from his gi and gave it to the uke. As the uke put out his hand to take it Sasaki Sensei twisted it away in a large natural spiral movement. The uke followed trying to catch it until finally he lost his balance and took the ukemi.

This was originally posted on the aikido site aikiweb in 2010.