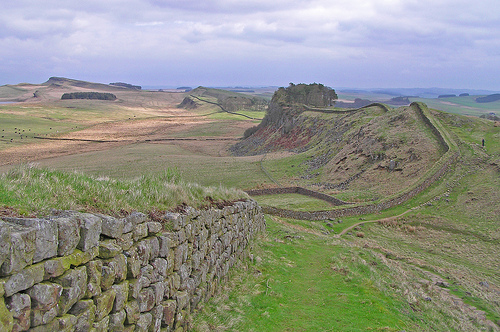 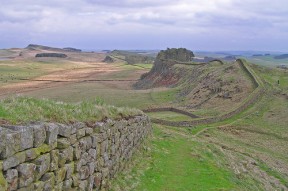 Over the heather the wet wind blows,
I’ve lice in my tunic and a cold in my nose.

The rain comes pattering out of the sky,
I’m a Wall soldier, I don’t know why.

The mist creeps over the hard grey stone,
My girl’s in Tungria; I sleep alone.

Piso’s a Christian, he worships a fish;
There’d be no kissing if he had his wish.

She gave me a ring but I diced it away;
I want my girl and I want my pay.

When I’m a veteran with only one eye
I shall do nothing but look at the sky.

The vocabulary is all very clear and simple. Tungria is in Belgium. The Christian symbol of the fish is the ichthys.

The poem is a couplet sonnet – seven rhyming couplets. I have always liked it because I grew up in a Roman town. In simple images Roman Wall Blues brings the life of a Roman soldier – perhaps the life of an occupying soldier of any time and any place – vividly to life.

I wanted to add that you can also see the poem as a military cadence. The title blues suggests music anyway. You can imagine Roman legionnaires marching to it and calling out as they march. Well to a latin version.

Rock musician Alex Harvey released an album with the same title, Roman Wall Blues. It is a very cool title.