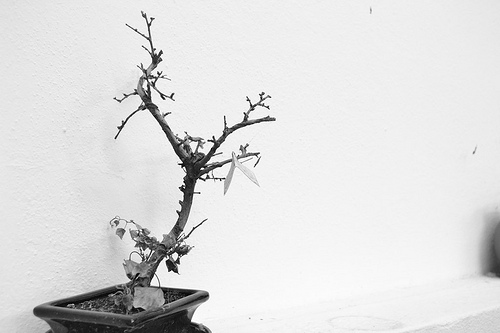 Inspiration is the bonsai’s trump card. But it’s a person who makes it that way, you know. Look over there, at the black pine. Now that’s inspiration. See there? An old tree gives us a lesson in life. Strange, isn’t it? The tree may look withered, but it’s living just the same. A tree can withstand the passage of time. Humans are the only ones who are at their most beautiful when they’re young. But a tree, no matter how many years go by, you train it and train it, and though the tree itself would naturally resist, gradually it bends to your will. And when it does? Why then it’s as if life has sprung forth anew, isn’t it? Inspiration resides at that point when you begin to feel the miraculous.
Natsuo Kirino, Grotesque

All that I love
I fold over once
And once again
And keep in a box
Or a slit in a hollow post
Or in my shoe
Edith L Tiempo, Bonsai

The bonsai tree
in the attractive pot
could have grown eighty feet tall
on the side of a mountain
till split by lightning
But a gardener
carefully pruned it
It is nine inches high
Marge Piercy, The Bonsai Tree

pruning my bonsai
which to keep, which to lop…
(sigh) can’t decide
Dave Burke, Bonsai & Haiku

I often walk past a house with a row of bonsai trees displayed outside. I don’t know much about bonsai. I used to feel a little like Marge Piercy perhaps in her poem The Bonsai Tree. That the end result – a bonsai tree – was sometimes beautiful. Even poignant. But that the aesthetic purity had been achieved by artificially constricting and deforming nature.

But budo – martial arts – might be a bonsai tree. You can even say train about causing a plant to grow in a certain way. Of course in budo you train your spirit as well as your body. Your body has to learn to move in ways that seem unnatural and awkward at first. I wrote about kata in Kata and Aikido. Kata based budo especially have a strong intrinsic rigour. Roughness and looseness and unnecessary movements are cut away. Pruned. And one day, one day, the movements will be simple and natural and pure. You will have caught the essence of the tree. Or the essence of the art. And the essence of your own heart.