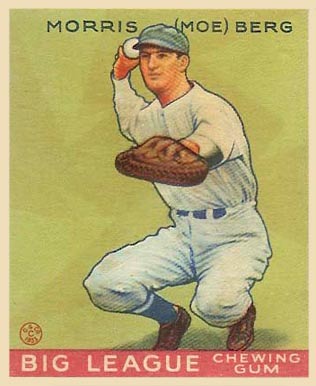 I talked about spies and Richard Sorge in spy only a couple of weeks ago. Then today I read an article by T Rees Shapiro in the Washington Post reviewing a book about another spy in Japan. The spy was Moe Berg. He was – incredibly – a member of an all-star American baseball team that toured Japan in 1934. That tour included Babe Ruth and Lou Gehrig. On the trip Moe Berg filmed Japanese installations with a movie camera.

He was not really all-star material. One teammate quipped that Berg could speak a dozen languages but could not hit in any of them.

This was all suspicion and supposition. But later he became a spy in the Office of Strategic Studies, the forerunner of the CIA. So I don’t think there’s much doubt about what he was doing in Japan.