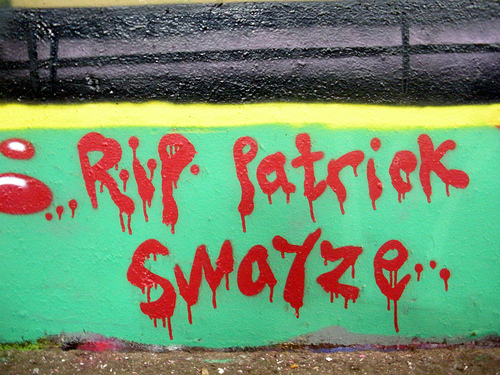 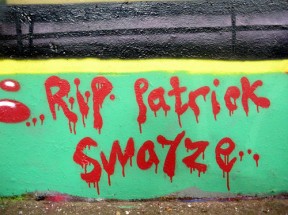 Patrick Swayze died in September 2009 of pancreatic cancer. He was in a few popular movies, for example Road House and Dirty Dancing. I liked him very much in Point Break (which was directed by Kathryn Bigelow, who won the Oscar in 2010 for The Hurt Locker). He was Bodhi, one of a gang of bankrobbers who wore Presidents of America masks. Keanu Reaves was Johnny Utah, the FBI agent who went undercover and became a surfer to try to catch them. There is a great quote in that movie. A tough old FBI hand looks at Johnny Utah and says “Guess we must just have ourselves an asshole shortage, huh?” He just says, “Not so far.” It’s a very cool movie.

But I want to talk about Ghost. I think it was Patrick Swayze’s most popular movie. He plays Sam Wheat, a young banker who moves in to a renovated loft apartment with his cool ceramic artist girlfriend (Demi Moore looking boyish). It’s partly a romantic movie and there is a famous potter’s wheel love scene with Unchained Melody by the Righteous Brothers on the soundtrack.

When I saw Ghost in 1990 I remember thinking, “Hey, this is about ki!” (movie spoilers below…)

Suddenly Sam is shockingly killed in a mugging that goes wrong. But after his death his ghost stays on earth to try to protect his girlfriend from danger.

Sam, now a ghost, has to learn from other ghosts (ghost sempai!) how to pass through doors effortlessly and then how to touch and move physical things when he doesn’t have a body. These lessons are like aikido.

First the ghost of an old man in the hospital where he was taken tells him,

Hey relax. It ain’t like before, you know. It’s a whole new ball of wax. Come here, I’ll tell you a secret. Doors ain’t as bad as you think. Zip zap, it ain’t nothing at all…

Then when he realizes that his girlfriend is in danger he persuades a disturbed ghost from a subway train to teach him how to move things. That ghost tells him,

So Sam asks him how he can focus.

I don’t know how you focus. You just focus. You got to take all your emotions, all your anger, all your love, all your hate and push it way down here into the pit of your stomach, and then let it explode like a reactor. From your gut like I told you. Give it time. What else have you got.

Yes. Sounds like ki to me. You have to relax. Then when you catch it, it feels like you’re doing nothing at all. And to get to that you have to learn to focus your energy. And it comes from the pit of your stomach. And it takes time. But what else have we got?

Whoopi Goldberg is in Ghost too. She is very funny as a kind of scam artist fake medium who pretends to contact departed loved ones in return for money. Despite herself she has inherited some psychic powers from her mother and she is the only one who can hear Sam’s ghost voice. She was so good she won an Oscar. I found out that Patrick Swayze fought for Whoopi Goldberg to get that part. He was kind and cool. Any death is sad but when a good person dies an emptiness is left behind on the earth. Rest in peace, Patrick.