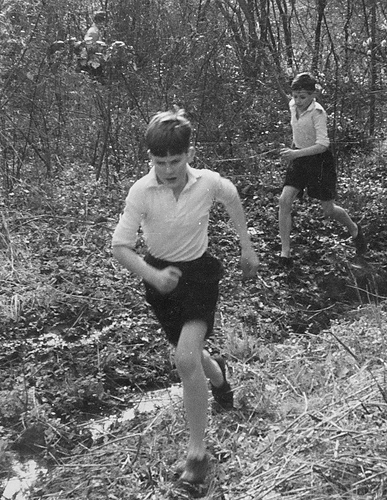 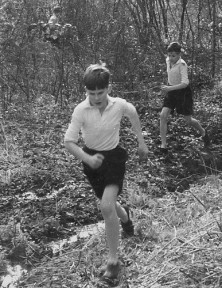 As I came over Windy Gap
They threw a halfpenny into my cap,
For I am running to Paradise;
And all that I need do is to wish
And somebody puts his hand in the dish
To throw me a bit of salted fish:
And there the king is but as the beggar.

My brother Mourteen is worn out
With skelping his big brawling lout,
And I am running to Paradise;
A poor life do what he can,
And though he keep a dog and a gun,
A serving maid and a serving man:
And there the king is but as the beggar.

Poor men have grown to be rich men,
And rich men grown to be poor again,
And I am running to Paradise;
And many a darling wit’s grown dull
That tossed a bare heel when at school,
Now it has filled an old sock full:
And there the king is but as the beggar.

The wind is old and still at play
While I must hurry upon my way,
For I am running to Paradise;
Yet never have I lit on a friend
To take my fancy like the wind
That nobody can buy or bind:
And there the king is but as the beggar.

Vocabulary. Skelping in the second stanza means smacking. Light – lit in line 4 of the last stanza – means to happen upon.

The rhyming scheme is AABCCCD, EEBFFFD… with a rhyming couplet, paradise, a rhyming triplet and beggar in each stanza.

It’s not the kind of poem you think of when you think of Yeats. Yeats is one of the most important poets in any language and of any time. His poems use wonderful language and rhythm and talk about love and death and Celtic myths and Ireland. I even use a quotation by Yeats The Celtic Twilight as my signature on the aikido forum aikiweb.

we can make our minds so like still water, and so live for a moment with a clearer, perhaps even with a fiercer life

Yeats was also influenced by Japanese noh drama. Incidentally he was given a sword by a Japanese admirer and this is about it:

Where Sato’s gift, a changeless sword,
By pen and paper lies,
That it may moralise
My days out of their aimlessness.

Running to Paradise is charming and almost whimsical. It does talk about death though.

W B Yeats, Responsibilities and Other Poems free e-book on gutenberg

The Waterboys, An Appointment With Mr Yeats