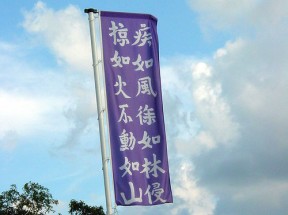 Takeda was a Daimyo in the warring states period of Japanese history. He was also known as the Tiger of Kai. He had a legendary rivalry with Uesugi Kenshin – the Dragon of Echigo – and fought him five times in battle and once in single combat (Takeda used a tessen – an iron fan – against Uesugi’s katana). Takeda Shingen is still enormously admired and popular in Japan (in fact they both are). You can still go to onsens – hot springs – where he went to recover after battles – the minerals in the water are supposed to help sword wounds to heal faster.

The phrase originally came from the Art of War by Sun Tzu. They were Takeda Shingen’s principles of strategy – long-range planning – and also his principles of tactics – how to fight in a battle.

We use that idea of void or emptiness in budo in advanced concepts like mushin or mushin no shin, the mind of no mind, munen, no thought, muso, no reflection, and mugamae, a free stance – or lack of stance – quite different from a formal stance. So freedom is important – our minds should never be fixed or stuck.

In Takeda Shingen’s phrase immovable as a mountain there are echoes of fudoshin – immovable mind or calm determination. It is not a contradiction of mushin. The zen monk Takuan discussed these concepts in his letter to the sword master Yagyu Tajima no kami (Yagyu Munenori) on zen and swordsmanship (The Unfettered Mind by Takuan Soho). The mind has to be free and fluid but at the same time for ever centred. Incidentally Takuan in another letter about zen and tea (cha-no-yu) talks about the five Chinese elements (wu xing): fire, earth, metal, water and wood, and living in harmony with nature (mountains, rivers, rocks and trees).

Silent as a forest is perhaps less relevant to budo. And for fierce as fire, in a lyrical and elemental mood, here is a twentieth century poet’s vision of two elements at the end of the world:

Fire and ice, by Robert Frost

Some say the world will end in fire,
Some say in ice.
From what I’ve tasted of desire
I hold with those who favor fire.
But if it had to perish twice,
I think I know enough of hate
To say that for destruction ice
Is also great
And would suffice.

In the end what has all this got to do with budo? Simple. We always have to go back to Takeda Shingen’s first principle:

This post was first published on the aikido site aikiweb