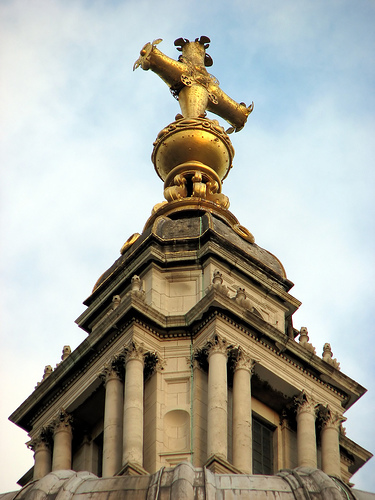 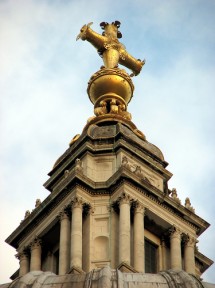 The great pulsation passed. Glass lay around me
Resurrected from the end. I walked
Along streets of slate-jabbering houses,

Against an acrid cloud of dust, I saw
The houses kneel, revealed each in its abject
Prayer, my prayer as well: ‘Oh God,
Spare me the lot that is my neighbour’s.’

Then, in the upper sky, indifferent to our
Sulphurous nether hell, I saw
The dead of the bombed graveyard, a calm tide
Under the foam of stars above the town.

And on the roof-tops there stood London prophets
Saints of Covent Garden, Parliament Hill Fields,
Hampstead, Hyde Park Corner, Saint John’s Wood,
Crying aloud in cockney fanatic voices:
‘In the midst of Life is Death!’ They kneeled
And prayed against the misery manufactured
In mines and ships and mills, against
The greed of merchants, vanity of priests.
They sang, ‘We souls from the abyss
To whom the stars are fields of flowers,
Tell you: Rejoice in the abyss!
For hollow is the skull, the vacuum
In the gold ball, St Paul’s gold cross.
Unless you will accept the emptiness
Within the bells of foxgloves and cathedrals,

Each life must feed upon the deaths of others,
The shamelessly entreating prayer
Of every house will be that it is spared
Calamity that strikes its neighbour.’

About language. Nether is low or lower – as in the Netherlands. The vocabulary is mostly straightforward but language is used in interesting ways. Slate-jabbering houses. The anthropomorphism of The houses kneel.

Stars are mentioned twice: Under the foam of stars, and the stars are fields of flowers. Another flower is mentioned: foxgloves are seen as bells like the bells of cathedrals.

The emptiness within the bells of foxgloves mirrors the hollowness, the vacuum, the abyss.

The list of places in London reminds you of the list of churches in the children’s nursery rhyme Oranges and Lemons. The Old Bailey comes up in that nursery rhyme and it is very near St Paul’s Cathedral.

Twice there is a prayer: spare me the lot that is my neighbour’s,  and The shamelessly entreating prayer | Of every house will be that it is spared | Calamity that strikes its neighbour.

The poem is about the bombing of London in the Blitz in the Second World War. But there are no rules in poetry. It can be about any abyss if you want it to be.

The Wall Street Journal article below describes Stephen Spender as eclipsed in his youth by W.H. Auden, in middle age by Dylan Thomas and in old age by Philip Larkin. But it’s not a competition. Stephen Spender was a great poet and Rejoice in the Abyss is one of his memorable poems.

http://www.independent.co.uk/arts-entertainment/books/features/angel-of-the-left-paul-binding-recalls-his-friendship-with-stephen-spender-1637510.html Angel of the Left in the Independent