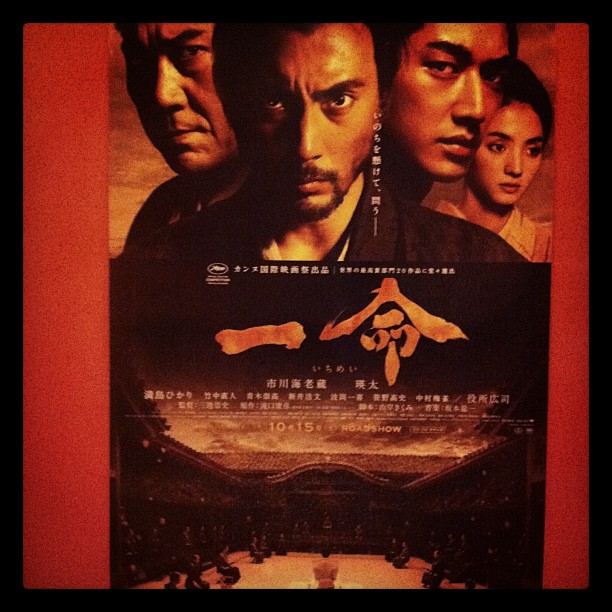 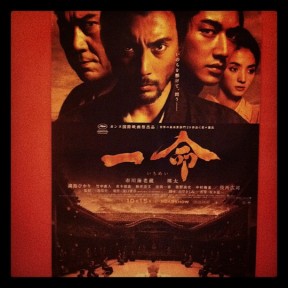 This week another video clip of a cool swordfight. And how this clip and last week’s clip relate to aikido. It’s from Hara-Kiri: Death of a Samurai directed by Takashi Miike. It’s the trailer not the complete fight so try to get hold of the movie.

In it’s hard being a samurai I wrote about The Twilight Samurai directed by Yoji Yamada. There is a superb fight sequence. The actor Hiroyuki Sanada enters, breaks the balance, gets behind his opponent, and completely controls his opponent’s weapon. A couple of times he deliberately leaves an opening for his opponent to attack and then counters expertly. As I mentioned he has extensive experience in martial arts and in action movies and his sword work is very natural.

In fact Hara-Kiri: Death of a Samurai is a remake of a great classic Japanese samurai movie Harakiri directed by Masaki Kobayashi. The Japanese title of that movie is Seppuku. That’s another movie I’ll talk about some other time.

For now there is also a wonderful fight sequence in Hara-kiri: Death of a Samurai. The kabuki actor Ichikawa Ebizo XI plays the main character. I doubt if he has any direct martial arts experience but I’m sure his long career in kabuki helped him with the fight movements. And he has charisma too.

There are some differences in the approaches to fighting. Sanada fought a duel. Ichikawa is a lone fighter against dozens of opponents. He uses them against each other entering and spinning and moving and letting them get in each other’s way.

There are some similarities in the two fights too.

Both of the samurai main characters use swords without real blades. They both deliberately spare the lives of their opponents. Although the outcomes of the fights cannot be compared both these samurai make the points that they wanted to make.

Great movies, both of them.  Don’t miss them if you are interested in Japanese culture or in martial arts. And if you glance at the lines above again you will see: entering, spinning, breaks the balance, gets behind the opponent, completely controls his opponent’s weapon and spare the lives of their opponents. That’s a pretty accurate description of aikido.

this post is published simultaneously on the aikido site aikiweb