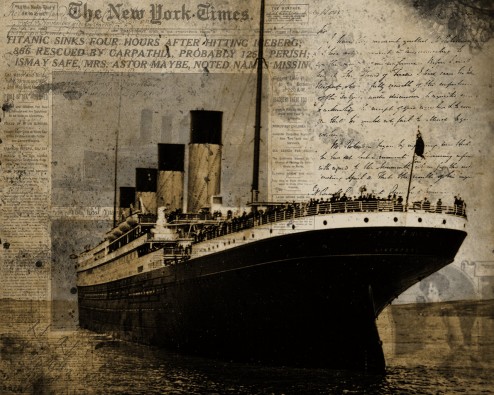 The Westerly Wind asserting his sway from the south-west quarter is often like a monarch gone mad, driving forth with wild imprecations the most faithful of his courtiers to shipwreck, disaster, and death.
Joseph Conrad, The Mirror of the Sea

The man who has experienced shipwreck shudders even at a calm sea | tranquillas etiam naufragus horret aquas
Ovid, Letters from Pontus

My visions were of shipwreck and famine; of death or captivity among barbarian hordes; of a lifetime dragged out in sorrow and tears, upon some gray and desolate rock, in an ocean unapproachable and unknown.
Edgar Allan Poe, The Narrative of Arthur Gordon Pym

A hundred years ago the Titanic sank. A forensic astronomer thinks it was because on 4 January 1912 the moon came close to the earth. The closest for 1400 years. And the day before the earth had been at its closest point to the sun on its annual orbit. This combination of super-high tides and the extra heat led to a dangerous breaking up of ice fields. Many icebergs broke off and floated south into the shipping lanes of the north Atlantic. One of them to a fatal meeting with the RMS Titanic on 15 April 1912.

Wait. Step back a moment. A forensic astronomer?! I didn’t know that was a job. Sounds very cool.

Shipwrecks. Shipwrecks and castaways played surprising and important roles in the opening of Japan to the world. The Dutch ship Liefde arrived in Kyushu in 1600. It was the only surviving ship of the original fleet of five. Hundreds of sailors were lost. William Adams was on the Liefde. He was the first Englishman in Japan.

Christopher and Cosmas were the first Japanese to cross the Pacific ocean. They also crossed the Indian ocean on their way to London. Later their ship was lost at sea.

Otokichi was a Japanese castaway who eventually travelled to London. He returned to Japan as part of the fleet that negotiated the Anglo-Japanese Friendship Treaty.

John Manjiro was a Japanese boy. He was rescued and brought to the USA after his fishing boat was wrecked. Later he was a member of the first Japanese Embassy sent to the United States by the Tokugawa shogunate.

The founder of judo Jigoro Kano died at sea. Not in a shipwreck. But there was a suspicion that he might have been poisoned…

Anniversaries give us a chance to pause and to remember. The founder of aikido Morihei Ueshiba died on 26 April 1969. Every year on the 29 April national holiday there is an anniversary event at the Aiki Shrine in Iwama.

Joseph Conrad, The Mirror of the Sea

Interesting discussion on judoforum about Japanese Imperial Military Martial Arts including comments about the death of Jigoro Kano. Also aikido and aikijujutsu.
http://judoforum.com/index.php?/topic/21794-japanese-imperial-military-martial-arts/

shipwreck poem by Gerard Manley Hopkins on my blog
http://mooninthewater.net/poemoftheweek/2012/03/27/the-loss-of-the-eurydice-by-gerard-manley-hopkins/