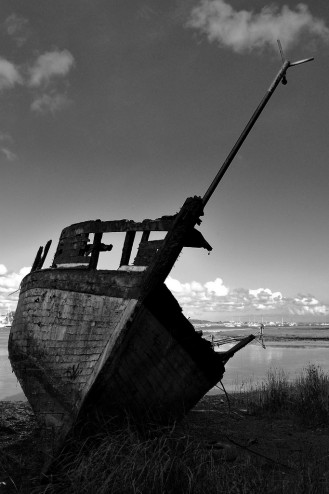 Where she foundered! One stroke
Felled and furled them, the hearts of oak!
And flockbells off the aerial
Downs’ forefalls beat to the burial.

For did she pride her, freighted fully, on
Bounden bales or a hoard of bullion? –
Precious passing measure,
Lads and men her lade and treasure.

She had come from a cruise, training seamen –
Men, boldboys soon to be men:
Must it, worst weather,
Blast bole and bloom together?

No Atlantic squall overwrought her
Or rearing billow of the Biscay water:
Home was hard at hand
And the blow bore from land.

And you were a liar, O blue March day.
Bright sun lanced fire in the heavenly bay;
But what black Boreas wrecked her? he
Came equipped, deadly-electric,

A beetling baldbright cloud thorough England
Riding: there did stores not mingle? and
Hailropes hustle and grind their
Heavengravel? wolfsnow, worlds of it, wind there?

Now Carisbrook keep goes under in gloom;
Now it overvaults Appledurcombe;
Now near by Ventnor town
It hurls, hurls off Boniface Down.

Too proud, too proud, what a press she bore!
Royal, and all her royals wore.
Sharp with her, shorten sail!
Too late; lost; gone with the gale.

This was that fell capsize,
As half she had righted and hoped to rise
Death teeming in by her portholes
Raced down decks, round messes of mortals.

Then a lurch forward, frigate and men;
‘All hands for themselves’ the cry ran then;
But she who had housed them thither
Was around them, bound them or wound them with her.

Marcus Hare, high her captain,
Kept to her – care-drowned and wrapped in
Cheer’s death, would follow
His charge through the champ-white water-in-a-wallow,

All under Channel to bury in a beach her
Cheeks: Right, rude of feature,
He thought he heard say
‘Her commander! and thou too, and thou this way.’

It is even seen, time’s something server,
In mankind’s medley a duty-swerver,
At downright ‘No or yes?’
Doffs all, drives full for righteousness.

Sydney Fletcher, Bristol-bred,
(Low lie his mates now on watery bed)
Takes to the seas and snows
As sheer down the ship goes.

Now her afterdraught gullies him too down;
Now he wrings for breath with the deathgush brown;
Till a lifebelt and God’s will
Lend him a lift from the sea-swill.

Now he shoots short up to the round air;
Now he gasps, now he gazes everywhere;
But his eye no cliff, no coast or
Mark makes in the rivelling snowstorm.

Him, after an hour of wintry waves,
A schooner sights, with another, and saves,
And he boards her in Oh! such joy
He has lost count what came next, poor boy. –

They say who saw one sea-corpse cold
He was all of lovely manly mould,
Every inch a tar,
Of the best we boast our sailors are.

Look, foot to forelock, how all things suit! he
Is strung by duty, is strained to beauty,
And brown-as-dawning-skinned
With brine and shine and whirling wind.

O his nimble finger, his gnarled grip!
Leagues, leagues of seamanship
Slumber in these forsaken
Bones, this sinew, and will not waken.

He was but one like thousands more,
Day and night I deplore
My people and born own nation,
Fast foundering own generation.

I might let bygones be – our curse
Of ruinous shrine no hand or, worse,
Robbery’s hand is busy to
Dress, hoar-hallowèd shrines unvisited;

Only the breathing temple and fleet
Life, this wildworth blown so sweet,
These daredeaths, ay this crew, in
Unchrist, all rolled in ruin –

Deeply surely I need to deplore it,
Wondering why my master bore it,
The riving off that race
So at home, time was, to his truth and grace

That a starlight-wender of ours would say
The marvellous Milk was Walsingham Way
And one – but let be, let be:
More, more than was will yet be. –

O well wept, mother have lost son;
Wept, wife; wept, sweetheart would be one:
Though grief yield them no good
Yet shed what tears sad truelove should.

But to Christ lord of thunder
Crouch; lay knee by earth low under:
‘Holiest, loveliest, bravest,
Save my hero, O Hero savest.

And the prayer thou hearst me making
Have, at the awful overtaking,
Heard; have heard and granted
Grace that day grace was wanted.’

Not that hell knows redeeming,
But for souls sunk in seeming
Fresh, till doomfire burn all,
Prayer shall fetch pity eternal.

I wrote a post called crak! about onomatopoeia in Japanese for my blog about aikido and Japanese culture. There are a couple of links to poems in that post. Gerard Manley Hopkins paid a lot of attention to the sound of his poetry. Onomotopoeia was one of the techniques he used frequently.

Don’t be put off by the first two lines. It seems like a very old-fashioned start. There is a thee, an O Lord, and an O alas! Uh oh – three danger signals. So just when you are about to close the book you notice the alliteration running from the first to the second stanza:

eleven fathoms fallen
Where she foundered! One stroke
Felled and furled them

And you do a double take. Then you read:

And you were a liar, O blue March day.
Bright sun lanced fire in the heavenly bay;
But what black Boreas wrecked her? he
Came equipped, deadly-electric,

A beetling baldbright cloud thorough England
Riding: there did storms not mingle? and
Hailropes hustle and grind their
Heavengravel? wolfsnow, worlds of it, wind there?

And you silently say, wow! as you realize that you are in the hands of a master. He tosses words in the air and makes up new ones. In fact this is a very interesting juxtaposition of formal Victorian style with a hypermodern concept of the English language. Gerard Manley Hopkins was influenced by the musical sounds of Welsh and also the simple power of the lexicon of Old English: a beetling baldbright cloud; hoar-hallowed; riving. You can see this poem as a bridge from the nineteenth century to the twentieth.

I think we might read Stanzas 19 and 20 differently in the 21st century from readers in the 19th century.

Gerard Manley Hopkins was a Jesuit priest. I wonder what Stanza 25 says about his Catholic faith.

And why in the last stanza does doomfire burn all?

The Eurydice sank off the Isle of Wight in the South of England. More than 300 sailors and young trainees died.