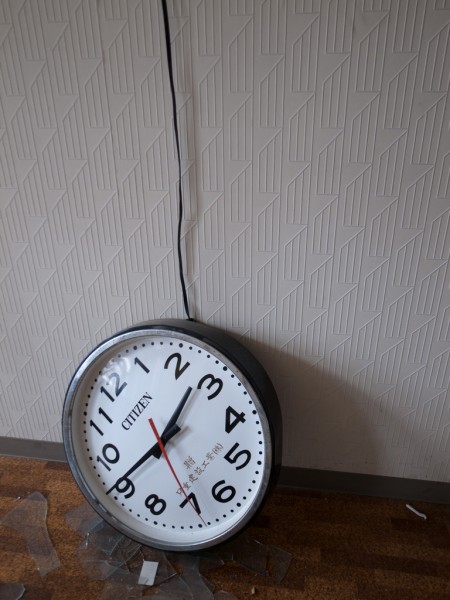 I wrote this essay a year ago after the earthquake and tsunami hit Tohoku. Everyone in Japan has been affected directly or indirectly. I know people whose houses were destroyed or seriously damaged. I have met refugees from Fukushima who might never, ever, be able to go home. And nuclear power does not look so clean and cheap when you factor in the costs of a meltdown.

mother calls but we don’t hear
there’s lots more things to do
it’s only 5 o’clock and we’re not tired yet
but we will be
very shortly
David Bowie, There is a happy land

There is a happy land far, far away
traditional hymn from the movie The Proposition, arranged by Nick Cave and Warren Ellis

There’s something about 46 minutes past the hour.

When I was a boy we played with conkers. Conkers are smooth polished horse chestnuts. We bored holes through them with metal skewers and threaded them with string. Then we duelled, taking swings at other conkers. Eventually one conker would shatter and the one left was the winner. A strong conker could battle on for days or weeks.

We played with marbles too. Marbles are colourful glass balls. You flicked your thumb across your forefinger to shoot them along the ground at other marbles. They were beautiful. Clear glass marbles with oxblood centres. Milky white marbles streaked with blue. Flick. And the chink of the glass.

A common children’s toy in Japan is the kendama. You throw a small wooden ball on a string up to catch it in a cup or to impale it on the wooden handle. It’s like ring-and-pin or cup-and-ball or balero or boliche. In Japanese the ken in kendama can be sword or fist. Wood clacks rhythmically on wood.

Another traditional toy that is still popular in Japan is the beigoma. It’s a small metal spinning top. There is only one maker left in Japan. You wrap it with string and hurl it spinning onto a fighting surface. All the tops spin and spin. When they touch one will fly off. The one left at the end is the winner.

All these games have something hitting something else. Percussion. And noise. There is a satisfying noise. Children hear noises differently. They love sounds. Tapping feet. Drumming fingers.

There was a story on the BBC about a nine-year-old boy who lost all his family members in the tsunami. Of course he didn’t have photos to help find them. Or identify them. So he drew pictures.

There is a happy land by David Bowie

There is a happy land, hymn by Andrew Young to a tune arranged by Leonard P Breedlove
arranged by Nick cave and Warren Ellis for the movie The Proposition

This essay was originally published in a charity e-book put together by some writers and photographers to raise money for victims of the earthquake and tsunami in Tohoku on 11 March 2011. It costs $9.99.