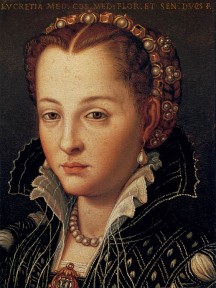 My Last Duchess
by Robert Browning

Ferrara
That’s my last Duchess painted on the wall,
Looking as if she were alive. I call
That piece a wonder, now: Frà Pandolf’s hands
Worked busily a day, and there she stands.
Will ‘t please you sit and look at her? I said
‘Frà Pandolf’ by design, for never read
Strangers like you that pictured countenance,
The depth and passion of its earnest glance,
But to myself they turned (since none puts by
The curtain I have drawn for you, but I)
And seemed as they would ask me, if they durst,
How such a glance came there; so, not the first
Are you to turn and ask thus. Sir, ‘t was not
Her husband’s presence only, called that spot
Of joy into the Duchess’ cheek: perhaps
Frà Pandolf chanced to say, ‘Her mantle laps
Over my lady’s wrist too much,’ or ‘Paint
Must never hope to reproduce the faint
Half-flush that dies along her throat:’ such stuff
Was courtesy, she thought, and cause enough
For calling up that spot of joy. She had
A heart – how shall I say? – too soon made glad,
Too easily impressed; she liked whate’er
She looked on, and her looks went everywhere.
Sir, ‘t was all one! My favour at her breast,
The dropping of the daylight in the West,
The bough of cherries some officious fool
Broke in the orchard for her, the white mule
She rode with round the terrace – all and each
Would draw from her alike the approving speech,
Or blush, at least. She thanked men, – good! but thanked
Somehow – I know not how – as if she ranked
My gift of a nine-hundred-years-old name
With anybody’s gift. Who’d stoop to blame
This sort of trifling? Even had you skill
In speech – (which I have not) – to make your will
Quite clear to such an one, and say, ‘Just this
Or that in you disgusts me; here you miss,
Or there exceed the mark’ – and if she let
Herself be lessoned so, nor plainly set
Her wits to yours, forsooth, and made excuse,
– E’en then would be some stooping; and I choose
Never to stoop. Oh, sir, she smiled, no doubt,
Whene’er I passed her; but who passed without
Much the same smile? This grew; I gave commands;
Then all smiles stopped together. There she stands
As if alive. Will ‘t please you rise? We’ll meet
The company below then. I repeat,
The Count your master’s known munificence
Is ample warrant that no just pretence
Of mine for dowry will be disallowed;
Though his fair daughter’s self, as I avowed
At starting, is my object. Nay, we’ll go
Together down, sir. Notice Neptune, though,
Taming a sea-horse, thought a rarity,
Which Claus of Innsbruck cast in bronze for me!

This is a famous dramatic monologue. The language is very clear. It doesn’t seem to be a poem almost because the rhythm and even the rhyming couplets are so skilful and unobtrusive. And the story itself is fascinating. You read it learning about the Duke of Ferrara’s world and realize that you have been learning even more about Ferrara himself. I still remember the thrill of horror when as a teenager I first read the lines:

I gave commands;
Then all smiles stopped together.

Then as a counterpoint to the poem there is the next scene. A twentieth century reply to Robert Browning in a poem by Richard Howard. The form this time is a letter and the letter writer is Nikolaus Mardruz, Ferrara’s interlocutor. He is the other presence in the first poem. He listened to a proposal of a marriage alliance and the poem is his – cynical – report to his master.

And the line that stays with me after Browning’s poem finishes:

and I choose
Never to stoop.

Nikolaus Mardruz to his Master Ferdinand, Count of Tyrol
by Richard Howard

My Lord recalls Ferrara? How walls
rise out of water yet appear to recede
identically
into it, as if
built in both directions: soaring and sinking…
Such mirroring was my first dismay –
my next, having crossed
the moat, was making
out that, for all its grandeur, the great
pile, observed close to, is close to a ruin!
(Even My Lord’s most
unstinting dowry
may not restore this wasted precincts to what
their deteriorating state demands.)
Queasy it made me,
glancing first down there
at swans in the moat apparently
feeding on their own doubled image, then up
at the citadel,
so high – or so deep,
and everywhere those carved effigies of
men and women, monsters among them
crowding the ramparts
and seeming at home
in the dingy water that somehow
held them up as if for our surveillance – ours?
anyone’s who looked!
All that pretension
of marble display, the whole improbable
menagerie with but one purpose:
having to be seen.
Such was the matter
of Ferrara, and such the manner,
when at last we met, of the Duke in greeting
My Lordship’s Envoy:
life in fallen stone!

Several hours were to elapse, in the keeping
of his lackeys, before the Envoy
of My Lord the Count
of Tyrol might see
or even be seen to by His Grace
the Duke of Ferrara, though from such neglect
no deliberate
slight need be inferred:
now that I have had an opportunity
– have had, indeed, the obligation –
to fix on His Grace
that perlustration
or power of scrutiny for which
(I believe) My Lord holds his Envoy’s service
in some favor still,
I see that the Duke,
by his own lights or perhaps, more properly
said, by his own tenebrosity,
could offer some excuse
for such cunctation…
Appraising a set of cameos
just brought from Cairo by a Jew in his trust,
His Grace had been rapt
in connoisseurship,
that study which alone can distract him
from his wonted courtesy; he was
affability
itself, once his mind
could be deflected from mere objects.

At last I presented (with those documents
which in some detail
describe and define
the duties of both signators) the portrait
of your daughter the Countess,
observing the while
his countenance. No
fault was found with our contract, of which
each article had been so correctly framed
(if I may say so)
as to ascertain
a pre-nuptial alliance which must persuade
and please the most punctilious (and
impecunious)
of future husbands.
Principally, or (if I may be
allowed the amendment) perhaps Ducally,
His Grace acknowledged
himself beguiled by
Cranach’s portrait of our young Countess, praising
the design, the hues, the glaze – the frame
and appeared averse,
for a while, even
to letting the panel leave his hands!
Examining those same hands, I was convinced
that no matter what
the result of our
(at this point, promising) negotiations,
your daughter’s likeness must now remain
“for good,” as we say,
among Ferrara’s
treasures, already one more trophy
in His Grace’s multifarious holdings,
like those marble busts
lining the drawbridge,
like those weed-stained statues grinning up at us
from the still moat, and – inside as well
as out – those grotesque
figures and faces
fastened to the walls. So be it!

Real
bother (after all, one painting, for Cranach
– and My Lord – need be
no great forfeiture)
commenced only when the Duke himself led me
out of the audience-chamber and
laboriously
(he is no longer
a young man) to a secret penthouse
high on the battlements where he can indulge
those despotic tastes
he denominates,
half smiling over the heartless words,
“the relative consolations of semblance.”
“Sir, suppose you draw
that curtain,” smiling
in earnest now, and so I sought –
but what appeared a piece of drapery proved
a painted deceit!
My embarrassment
afforded a cue for audible laughter,
and only then His Grace, visibly
relishing his trick,
turned the thing around,
whereupon appeared, on the reverse,
the late Duchess of Ferrara to the life!
Instanter the Duke
praised the portrait
so readily provided by one Pandolf –
a monk by some profane article
attached to the court,
hence answerable
for taking likenesses as required
in but a day’s diligence, so it was claimed…
Myself I find it
but a mountebank’s
proficiency – another chicane, like that
illusive curtain, a waxwork sort
of nature called forth:
cold legerdemain!
Though extranea such as the hares
(copulating!), the doves, and a full-blown rose
were showily limned,
I could not discern
aught to be loved in that countenance itself,
likely to rival, much less to excel
the life illumined
in Cranach’s image
of our Countess, which His Grace had set
beside the dead woman’s presentment… And took,
so evident was
the supremacy,
no further pains to assert Fra Pandolf’s skill.
One last hard look, whereupon the Duke
resumed his discourse
in an altered tone,
now some unintelligible rant
of stooping – His Grace chooses “never to stoop”
when he makes reproof…
My Lord will take this
as but a figure: not only is the Duke
no longer young, his body is so
queerly misshapen
that even to speak
of “not stooping” seems absurdity:
the creature is stooped, whether by cruel
or impartial cause–say
Time or the Tempter –
I shall not venture to hypothecate. Cause
or no cause, it would appear he marked
some motive for his
“reproof,” a mortal
chastisement in fact inflicted on
his poor Duchess, put away (I take it so)
for smiling – at whom?
Brother Pandolf? or
some visitor to court during the sitting?
– too generally, if I construe
the Duke’s clue rightly,
to survive the terms
of his… severe protocol. My Lord,
at the time it was delivered to me thus,
the admonition
if indeed it was
any such thing, seemed no more of a menace
than the rest of his rodomontade;
item, he pointed,
as we toiled downstairs,
to that bronze Neptune by our old Claus
(there must be at least six of them cluttering
the Summer Palace
at Innsbruck), claiming
it was “cast in bronze for me.” Nonsense, of course.

But upon reflection, I suppose
we had better take
the old reprobate
at his unspeakable word… Why, even
assuming his boasts should be as plausible
as his avarice,
no “cause” for dismay:
once ensconced here as the Duchess, your daughter
need no more apprehend the Duke’s
murderous temper
than his matchless taste.
For I have devised a means whereby
the dowry so flagrantly pursued by our
insolvent Duke (“no
just pretense of mine
be disallowed” indeed!), instead of being
paid as he pleads in one globose sum,
should drip into his
coffers by degrees –
say, one fifth each year – then after five
such years, the dowry itself to be doubled,
always assuming
that Her Grace enjoys
her usual smiling health. The years are her
ally in such an arbitrament,
and with confidence
My Lord can assure
the new Duchess (assuming her Duke
abides by these stipulations and his own
propensity for
accumulating
“semblances”) the long devotion (so long as
he lasts) of her last Duke… Or more likely,
if I guess aright
your daughter’s intent,
of that young lordling I might make so
bold as to designate her next Duke, as well…

Ever determined in
My Lordship’s service,
I remain his Envoy
to Ferrara as to the world.
Nikolaus Mardruz.

My Last Duchess on wikipedia

picture: Lucrezia de’Medici by Bronzino from Web Gallery of Art