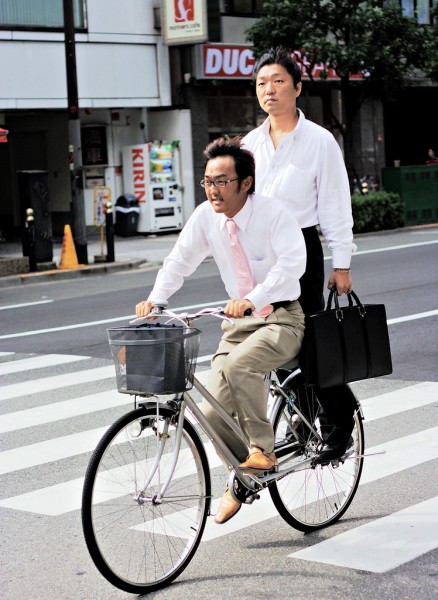 Captains of Industry by Janne Moren

A boy told me
if he roller-skated fast enough
his loneliness couldn’t catch up to him,
the best reason I ever heard
for trying to be a champion.
What I wonder tonight
pedaling hard down King William Street
is if it translates to bicycles.
Naomi Shihab Nye, The Rider

If you want to get from A to B
I’ll give you this advice for free:
You’ll find that cycling in the snow
Is not the quickest way to go.
Colin McNaughton, Slow, Slow, Thick, Thick Snow, from There’s An Awful Lot of Weirdos in Our Neighborhood

a cold
skeleton
that will return to
life
only
when it’s needed
Pablo Neruda, Ode to Bicycles

Consider a man riding a bicycle. Whoever he is, we can say three things about him. We know he got on the bicycle and started to move. We know that at some point he will stop and get off. Most important of all, we know that if at any point between the beginning and the end of his journey he stops moving and does not get off the bicycle he will fall off it. That is a metaphor for the journey through life of any living thing, and I think of any society of living things.
Wiliam Golding, A Moving Target

Is this it? The secret of balance in the martial arts? Children in Japan nonchalantly ride unicycles in the street like normal bicycles. Japanese elementary schools have racks of unicycles. So children have great balance. Balance in aikido and judo and karate and sumo probably doesn’t seem so difficult.

Bicycles seem to exist in a separate reality in Japan. Everyone throws out the rulebook. If there ever was a rulebook. Everybody rides on pedestrian-only sidewalks. People use mobile phones while they are cycling. And nearly every single cyclist in Japan holds up an umbrella in the rain and rides one-handed. None of this is usually a problem because it is so predictable. There are some serious cyclists in Japan but most people ride mama chari – shopping bicycles.

This week I was having lunch at a table by a window when a young mother rode past on a bicycle. She had a child on a handlebar seat in front of her. She had another child on a seat behind her. Neither of the children was wearing a bicycle helmet. And she was holding a mobile phone to her ear and talking animatedly. I was speechless.

I know a few people who came off their bicycles in accidents and who were unhurt because they knew how to fall safely. Falling – ukemi. It’s probably the most useful martial arts technique anybody ever learns.

Once I did an aikido technique against a bicycle. A guy in a hurry on a bike was determined to take a gap on a sidewalk that was just big enough for one person. He wasn’t really trying to run me down – he thought I would have to jump out of the way and let him through. Entering slightly off the line of the bike I ended up with a spear-hand nukite zuki up against his throat with him leaning back 45 degrees and looking confused and sheepish. And braking very very hard.

William Golding’s metaphor of life as a bicycle ride is a cliché but that doesn’t mean it’s not true. Don’t stop moving forward. Or you’ll fall off.

my home page with a mirror of these blog posts plus posts not related to martial arts: http://mooninthewater.net/aikido

my columns on aikiweb:
Bamboo
Aiki and Kokyu Ryoku
Resistance
Martial Arts in Manga and Anime
Indigo Blue
Improvised Weapons No.1: The Umbrella
Brothers
Unbalance – Feet of Clay
Half a Tatami
Zen in the Art of Aikido