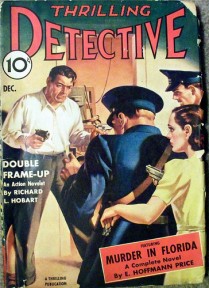 For who is ever quite without his landscape,
The straggling village street, the house in trees,
All near the church, or else the gloomy town house,
The one with the Corinthian pillars, or
The tiny workmanlike flat: in any case
A home, the centre where the three or four things
that happen to a man do happen? Yes,
Who cannot draw the map of his life, shade in
The little station where he meets his loves
And says good-bye continually, and mark the spot
Where the body of his happiness was first discovered?
An unknown tramp? A rich man? An enigma always
And with a buried past but when the truth,
The truth about our happiness comes out
How much it owed to blackmail and philandering.
The rest’s traditional. All goes to plan:
The feud between the local common sense
And that exasperating brilliant intuition
That’s always on the spot by chance before us;
All goes to plan, both lying and confession,
Down to the thrilling final chase, the kill.
Yet on the last page just a lingering doubt:
That verdict, was it just? The judge’s nerves,
That clue, that protestation from the gallows,
And our own smile… why yes…
But time is always killed. Someone must pay for
Our loss of happiness, our happiness itself.

About language. There is almost nothing to say about this clear and simple language. Perhaps just that Corinthian is an ornate Greek style of architecture also used by the Romans.

Some questions: what are the three or four things that happen to a man? What is the feud between the local common sense and that exasperating brilliant intuition? Is happiness the victim? The body first discovered – perhaps outlined on the ground in white? Or is time the victim? Time is always killed. And finally what can we deduce!? What can the story, the Detective Story, be about?

I chose this poem as a tribute to the crime fiction writer Reginald Hill. He died on 12 January 2012. I liked his Dalziel and Pascoe stories and it was only reading his obituary that I found out he also wrote some other books I liked using other pen names.

Incidentally W H Auden was born in Yorkshire in the north of England. Ted Hughes was from Yorkshire and so was Reginald Hill’s famous detective Andrew Dalziel. W H Auden became a US citizen.

While we are talking about detective stories I also want to add an affectionate tribute to a detective of my childhood. Peter Falk who played Lieutenant Columbo died on 23 June 2011.

Auden’s poem Stop All the Clocks was read in the movie Four Weddings and a Funeral.