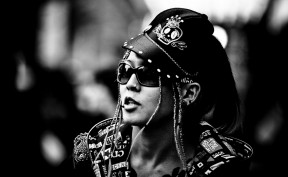 Help! Disaster! Fire and Smoke!
Robin’s trod on Batman’s cloak.
Torn a rip right up the back…
He’ll have to wear his anorak.
Kate Williams, Batman Comes Undone!

At the buffet at the station we can grab a bite to eat;
Because we’re going spotting we’ll need three Shredded Wheat;
Well, you’ve got to keep your strength up and keep yourself well fed
When you’re spotting with the big boys down at Crewe South Shed.
Dave Roberts, Crewe South Shed

I am a nerd.
Word.
Some have called me
a word nerd.
Geeks are too chic.
You see ’em in the street
Pretending not to be pretty
Charles Linart

I will now start the first Occult Club meeting. But I’m the only member. And I’m also the president.
Fuyuki Hinata, Keroro Gunso

Happy new year to everyone who reads my blog. Best wishes for happiness in your private lives and success in your professional and academic lives. For aikido and budo I wish you a deeper understanding than last year. Nobuyuki Watanabe Sensei once told me that the most important thing was never to stand still. Don’t get stuck doing things by rote so that you stagnate. Go in a spiral and always upwards. That applies to eveything not just martial arts. For the first post of the new year I want to write about otaku.

I went round a bend in a country road in Hakone near Mount Fuji once and was suddenly hit with the surreal sight of a group of middle-aged Japanese men dressed in fake American police uniforms riding on Harley Davidsons.

The word otaku has connotations of animé and manga and plastic figurines from Akihabara, the electric town area of Tokyo. But the meaning is wider than American words like nerd and geek or British words like anorak and trainspotter.

Otaku お宅 in Japanese means house and can be just a polite and formal way to say you. How it started to be used for animé and manga fans was apparently something like friends all calling each other otaku in a joking way. Like a group of guys fooling around calling each other sir. So they were all otaku and they recognized other otaku. Eventually the name came into wider use.

So now it means someone with an obsessive interest in the details of an obscure subject. Otaku have their own specialized vocabulary. Incomprehensible to outsiders.

It is probably an inexplicable phenomenon. And I haven’t got time to try to explain it because now I have to go to aikido keiko at the dojo. I just have to get my gi and my hakama and my bokken and my jo. Just a moment… Oh.

Great photo by Daniel Griffin used under creative commons licence. Check out his wonderful portraits in black and white on flickr.
http://www.flickr.com/photos/falsalama/with/2212712670/

the monologue from the movie Trainspotting
http://www.davidpbrown.co.uk/poetry/john-hodge.html

Finally I want to thank poet Kate Williams and poet and performer Dave Roberts once more for allowing me to use their poems and for being so cool and helpful and so lightning fast! Thanks guys.

this post is simultaneously published on aikiweb the internet aikido site

my columns on aikiweb:
Resistance
Martial Arts in Manga and Animé
Indigo Blue
Improvised Weapons No.1: The Umbrella
Brothers
Unbalance – Feet of Clay
Half a Tatami
Zen in the Art of Aikido