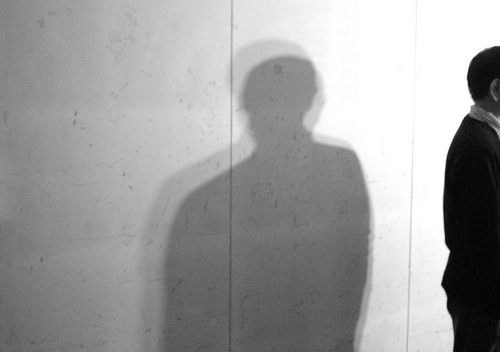 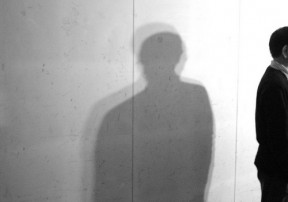 He is the man who makes notes,
The observer in the tall black hat
Face hidden in the brim:
He has watched me watching him.

The street-corner in Buda and after
By the post-office a glimpse
Of the disappearing tails of his coat,
Gave the same illumination, spied upon,
The tightness in the throat.

Once too meeting by the Seine
The waters a moving floor of stars,
He had vanished when I reached the door,
But there on the pavement burning
Lay one of his familiar black cigars.

The meeting on the stairway
Where the tide ran clean as a loom:
The betrayal of her, her kisses
He has witnessed them all: often
I hear him laughing in the other room.

He watched me now, working late,
Bringing a poem to life, his eyes
Reflect the malady of De Nerval:
O useless in this old house to question
The mirrors, his impenetrable disguise.
impressions

About language. Je est un autre means something like I is someone else. It’s a quotation from the French poet Arthur Rimbaud.

The malady of De Nerval is a reference to the French romantic poet Gérard de Nerval. He had several breakdowns and eventually (apparently) committed suicide. He left an enigmatic note for his aunt: “Do not wait up for me this evening, for the night will be black and white.”

The poem is full of mystery. Who is the man who makes notes? Who is the woman whose betrayal he witnessed?

And why does Lawrence Durrell use these words: the observer, watched me watching him, witnessed them all, watched me now, his eyes reflect, the mirrors?

There are many cool things about this poem. One is that it contains a self-portrait. In the final stanza: He watched me now, working late, bringing a poem to life. The moment of creation, perhaps of this actual poem, is described within the poem. The poet is frozen there for ever in the poem almost like Alfred Hitchcock playing a gentle witty joke by appearing in a cameo rôle in one of his own films.

Lawrence Durrell was a cosmopolitan who lived in several European countries. He is most famous for The Alexandria Quartet. His younger brother Gerald Durrell was a naturalist and the best-selling author of books about his experiences with animals. Theodore Stephanides was a doctor, scientist and poet who knew both Lawrence and Gerald from Corfu and who was an important influence on both of them.

This image from the third stanza of the poem is the one that stays in my mind after the words fade away:

Once too meeting by the Seine
The waters a moving floor of stars,
He had vanished when I reached the door,
But there on the pavement burning
Lay one of his familiar black cigars.

I found this very cool site with a lot of information about Lawrence and Gerald Durrell. Durrelliana, a Scrapbook